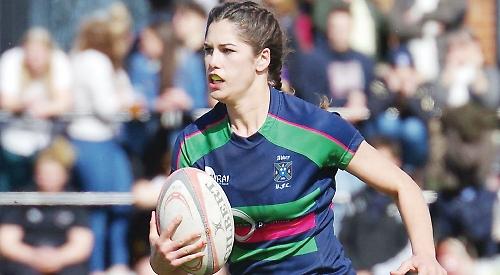 ABBEY NUNS saw their 19-match winning streak come to an end as they lost out to a physical Lewes Ladies side in the Junior Cup final at Royal Wootton Bassett on Sunday, writes Fiona Tomas.

Abbey, who were vying to end the season with double silverware having claimed promotion a fortnight ago, fought valiantly in what was an epic battle of women’s rugby between two very evenly matched teams.

Joey Fowler managed to steal several balls in the line-out as Abbey slowly settled into the game, but play was disrupted when Lewes’s Sarah McCarthy was unfortunately stretchered off with a broken arm following a legal challenge by Hayley Matthews.

Abbey’s best chance of the half saw Sarah Northover latch on to Tomas’s crossfield kick, only for Abi Wall to be penalised for having illegally bound to the maul that ensued.

Both teams went in at the break with no points on the board – a testament to the physicality and endless determination displayed by both sides.

The start of the second half saw Abbey break the deadlock when Alice Denton kicked three points through the posts after Lewes had repeatedly strayed offside.

But the East Sussex side responded immediately as the fiery Arthur raced around Wilson, before being pulled up for a forward pass.

This attacking phase inspired Lewes to up their intensity, which Dave Swan’s team struggled to match. Nicola Minchell soon went over in the corner to edge Lewes 3-5 in front, despite Josie Nelder missing the conversion.

Abbey saw another chance go begging when Tomas received a high ball at fullback and chased her kick downfield to force a knock-on in the Lewes 22.

A solid scrum then released Denton and the inform centre would have scored had it not been for some heroic defence on the line from Lewes, forcing her to spill the ball, which Lewes gathered and broke on the counter, working their way through Abbey’s fragmented defence before Rosie Neal clinically finished underneath the posts. This time Nelder made no mistake and put daylight between the two sides at 3-12.