Late penalty ensures Abbey get season off to winning 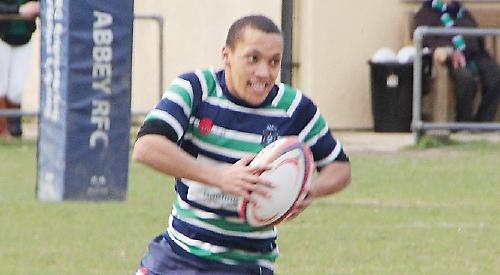 ABBEY just edged home in a tight and enthralling encounter in the battle of the newly-relegated teams at Rosehill in the opening Wadworth 6X Southern Counties North clash of the season.

Each side scored a single try in a match in which both teams defended resolutely, and the decisive score was a well-judged penalty from scrum half Diego De Marcilla Bahlsen at the start of second half injury time.

What looked like a nasty neck injury to Abbey wing Matt McLellan at the beginning of the second half saw the remainder of the game moved to a different pitch, and much of the third quarter was played in heavy rain punctuated by thunder.

Abbey’s new second row Anthony Deacon claimed the Windsor kick-off at the start of the game, and soon afterwards he won the first line-out of the afternoon. The Windsor pack attempted to pressurise thrower Adam Postlethwaite, a prop playing in the unaccustomed role of hooker, but he was equal to the challenge and his first throw was good.

Abbey soon offended in a kickable position, but Windsor fullback Jake Driscoll sent his penalty attempt wide to the right from 38 metres out.

Full back Gavin Dampies launched a quick restart from the 22, but Abbey were soon penalised again, and this time Driscoll made no mistake from in front of the posts.

The opening try came after 13 minutes when skipper Will Bevan, playing at outside half, broke to the left in the Windsor 22 and sent Mitchell on his way to the line. De Marcilla Bahlsen’s conversion attempt from close to the left touchline kept too low, but Abbey now had the lead.

A long pass from Mitchell gave McLellan a run, and after Deacon had won a line-out Dampies ran 20 metres before losing possession. At this point Windsor lost their big prop Alex Williams to injury, but the visitors mounted some dangerous attacks soon afterwards.

Windsor attacked again but Charlton intercepted and put Shaw away on a 20 metre run. From the next phase of play Bevan was high-tackled on the Windsor 22 and De Marcilla Bahlsen put Abbey 8-3 up after 36 minutes with the resulting penalty.

The remainder of the half saw Abbey defending frantically in their own 22 as Windsor produced their best rugby of the afternoon. Emmett and Balmer were again prominent as a series of drives tested the home defence, while Woodward, House and Shaw all made important tackles. Unfortunately for Abbey, Shaw was yellow-carded in first half injury time after being caught offside in the red zone. Driscoll found the target with the subsequent penalty and Abbey’s lead was reduced to 8-6 at the break.

A kick and run from Dampies put Abbey on the front foot at the start of the second half, but Windsor skipper Neil Baggett got very close to the home line when his side counterattacked.

Play was then halted for seven minutes with McLellan lying prone on the ground. His injury was clearly a bad one — the ambulance was still parked on the pitch at the final whistle — and the game was moved to the parallel pitch for the rest of the game. Theo Evered replaced McLellan with De Marcilla Bahlsen moving to the wing and Bevan to scrum half.

Almost immediately the heavens opened, drenching players and spectators alike. Windsor seemed to adapt more quickly to the new surroundings and the deteriorating weather, and they took the lead for the first time in the 53rd minute when outside half Jack Gaylor jinked his way to the line after a series of attacks. Crucially for Abbey, Driscoll again missed the conversion.

Abbey hit back and instantly looked dangerous and were awarded a scrum in the Windsor 22 and despite still lacking Shaw they held the ball through flanker Mike Beckly. Then Beckly tapped a free kick and made ground, receiving support from Postlethwaite, Deacon and Bevan. Saunders broke through a minute later, after which Windsor were penalised on the edge of their 22. De Marcilla Bahlsen made no mistake with his kick and the scores were level. Shaw returned from the bin, but Windsor were the next to attack. House put in an important tackle close to his own line, and then Gaylor knocked on when a try seemed possible. Strugar limped off at this point with Matt Gingell, normally a flanker, replacing him and slotting in on the wing.

As the half wore on it became clear that Abbey’s scrum had got the better of the Windsor eight, and they turned the screw in this department by sending on Richard King at prop for the final stages of the game.

Windsor attempted to move the ball wide, and winger Harry Woolman made 30 metres with a good run up the right touchline. Then left winger Gary Morgan was stopped in the corner after another Windsor attack. The visitors continued to press, and eventually Abbey were penalised in their own 22. Driscoll had been replaced by this time and Gaylor took over the kicking duties, landing a good goal to restore his side’s lead after 73 minutes of normal time.

Once again Abbey put this setback behind them and went back on the attack. Windsor were awarded a scrum 30 metres from their own line, but a mighty shove from Abbey sent them backwards. The visitors were penalised and De Marcilla Bahlsen kept his head to land another good kick to level the scores once more.

Two minutes of normal time remained, though it was clear that there would be at least 10 minutes of injury time following the earlier delay. Abbey attacked with Woodward, Shaw and House to the fore, and two minutes into injury time they were awarded a penalty wide on the left. With time running out the decision was taken to go for goal. In what was to prove the pivotal moment of the half, De Marcilla Bahlsen judged a difficult kick from close to the left touchline to perfection, the ball just creeping over the bar to put Abbey ahead for the first time in half an hour.

Windsor attacked for the remainder of the game but the Abbey defence stood firm to secure victory.