Abbey Nuns get league campaign off to a winning start 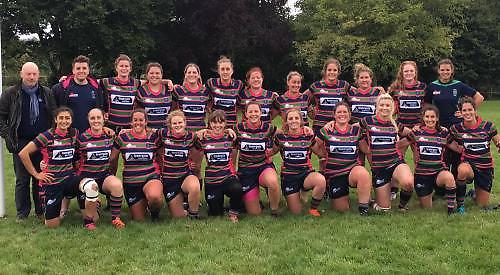 READING Abbey Ladies were forced to come from a try down as they kicked off their Championship campaign with a 26-15 victory against Guildford Ladies, writes Fiona Tomas.

Pippa Robinson, Jess Potter and Annette Tomas all crossed for the Nuns, who were denied a winning bonus point after resolute defending at the death from their Surrey opponents.

Guildford handed Abbey a stern welcome to England’s third tier of women’s rugby as the home side enjoyed the brighter start, touching down in the corner following a period of intense rucking. The Nuns responded when summer recruit Robinson showed immense strength to power over the whitewash at the other end after the flanker had combined well with the forward pack who wore down Guildford through the phases.

The momentum stayed with the Nuns after newcomer Gabriella Millard made a blistering 50m run down the wing and a penalty for Abbey ensued. Tomas kicked for the corner and the resulting line-out saw prop Potter charge over the line from close range after being fed by hooker Claire Stevens.

Guildford stormed back with a try of their own as their full-back orchestrated a great run through Abbey’s lacklustre defence, which was caught napping, to finish well.

But the Nuns had the final say before half-time, when centre Wall intercepted a loose Guildford pass and ran 50m to score under posts to put the away side in the driving seat at 17-10 up.

It was a much more coherent display from the Berkshire outfit after the re-start, with surging ball carries from captain Joey Fowler, who combined with second-row pairing Natalie Mitchell and Hannah Lee-Gill as Nuns maintained possession.

But the Nuns were still shaking off some pre-season rust as Guildford relentlessly roared back again after capitalising on a loose ball and threatened to spearhead a late resurgence, but Abbey saw the game out to register their first win of the new season.