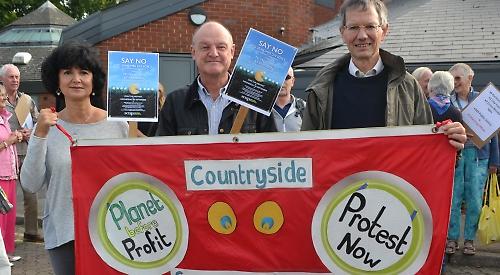 CAMPAIGNERS are celebrating after plans for 245 new homes on the outskirts of Emmer Green were refused permission.

Gladman Homes wanted to build on three fields between Peppard Road and Kiln Road, saying the development would be a “logical extension” to Emmer Green.

But South Oxfordshire District Council’s planning committee refused consent, saying the land in Eye and Dunsden parish wasn’t earmarked for housing in the council’s local plan and the scheme would detract from its rural setting.

The decision went against the advice of planning officers, who said objectors’ concerns could be offset by imposing planning conditions on the developer.

Some carried placards depicting Gladman both as a shark and as the computer game character Pac-Man “gobbling” up the countryside. Others held home-made banners and flags urging the committee to reject the application.

Opponents, including more than 300 residents, seven parish councils and two MPs, said the development would be too far from shops and other services so the residents would be isolated. It would also place intolerable pressure on public services and surrounding roads.

Gladman argued that the district council had failed to secure enough land to meet the next three years’ housing demand, rendering its local plan invalid.

Planning director Diana Richardson told the committee that the development would make a “significant contribution” towards the council’s housing supply.

She said “full and thorough consideration” had been given to the potential impact of the scheme.

The nearest services and facilities were less than a mile away and so within walking distance and a new bus stop could be installed so that residents could get to Sonning Common, Emmer Green and Reading town centre.

Mrs Richardson said she was aware of the concerns about the capacity of local roads, surgeries and schools but any necessary mitigation would be funded through statutory contributions.

One protestor stormed out of the meeting, claiming the developer’s argument was a “load of nonsense”, and received loud applause.

David Woodward, chairman of Eye and Dunsden Parish Council, said he didn’t underestimate the seriousness of the housing land shortage in South Oxfordshire but it was “critical” that this development was not allowed.

“Approving this will blow apart the spatial strategy underpinning your own adopted plan and the new one which is emerging as other sites will come tumbling forward,” he said.

“This area has never been planned for growth and with good reason as it is not convenient for services — where is the social cohesion? Walking to school or the shops in either Sonning Common or Emmer Green will be impossible and doctors’ surgeries will not be able to cope.

“You have a stark choice: either kow-tow to the greed of the developers and allow Reading to burst into our beautiful countryside or opt for sane and logical planning.”

Iain Pearson, a member of Kidmore End Parish Council, said: “We aren’t here because this is a good idea but because the district council has made a hash of its housing supply numbers and is vulnerable.

“This site wasn’t in any neighbourhood plan and no responsible parish would consider including it.”

Will Hall, district councillor for Sonning Common ward, said: “We aren’t just talking about a scrappy piece of land. This is high-quality, stunning countryside with village characteristics which couldn’t be further from the way it has been characterised by the applicant.

“The shops at Emmer Green aren’t anywhere near the development. It’s bonkers to suggest that and I should know as I don’t drive and must walk or take the bus everywhere within my parishes.

“It gets on my nerves when people say it’s housing for young people because that doesn’t have to clash with the need to protect the countryside. You can have both, you just have to build housing on appropriate sites.”

Councillor Hillier said: “The general design of this proposal is good but it’s totally in the wrong place and we should be looking at brownfield land first. You can see the huge strength of feeling in this room and we have to put our residents first.”

After the meeting, Cllr Woodward said: “We’re delighted with the outcome. A large group of people has been working very hard on this for more than a year and it’s definitely the right result based on the evidence we were able to provide.

“However, we know there’s very likely to be an appeal and we have to prepare for that even bigger battle. We’re already getting emails suggesting how we might go about that but I do hope we get a bit of a break first.

“I’m very glad that large numbers of people showed up to voice their concerns. It was a real display of people power and shows you can get the result you want.”

The decision was also welcomed by Henley MP John Howell and Reading East MP Matt Rodda, neither of whom attended the meeting but had expressed their concerns.

Mr Howell said: “This would have had a serious impact and forever changed the landscape of the South Oxfordshire countryside by urbanising what is currently a rural site.”

Mr Rodda said: “This decision preserves the greenfield area which forms part of the edge of Reading. Had it been permitted, the future development of the town could have been altered for good, which would have led to more suburban sprawl and stopped regeneration.”

The development would have included a mix of detached, semi-detached and terraced homes, of which up to 40 per cent would be “affordable”, with a main entrance off Peppard Road, a smaller access off Kiln Road and a footpath entrance off Marchwood Avenue.