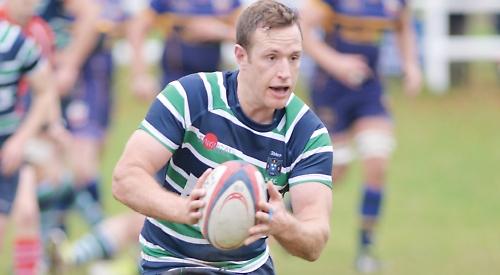 A DISAPPOINTING second half performance cost Abbey the chance of victory in their Southern Counties North clash at Buckingham, although the game seemed theirs for the taking after 40 minutes.

The visitors overcame a sluggish start and an 11-0 deficit to lead 14-11 at the interval, by which time their hosts had lost three players to injury. Buckingham lost another player after 65 minutes and played the final quarter of an hour with 14 men, but superior ball retention and teamwork gave them a deserved win.

Buckingham took the lead after just a minute when outside half Max Nagy kicked a routine penalty. Abbey number eight Will Woodward protected possession well at the opening scrum, but the visitors missed the chance to set up a good position when they lost their own line-out ball after a penalty. Buckingham lost their number eight Euan Prime as early as the eighth minute, though his absence was covered by replacement Phil Wright, who had an outstanding game.

Good tackling from winger Remi Norville and second row Chris Shaw halted the next home attack, but Buckingham increased their lead in the 12th minute with the first try of the afternoon. It came from a clean line-out catch from flanker Pat Ockendon who handed on to prop Matthew Payne. Payne burst through the Abbey cover with a 15 metre run before passing to scrum half Joe Chalmers, who crossed the line unopposed. Nagy was unable to convert.

Buckingham continued to attack, and Abbey were grateful for the cool head and quick thinking of winger Remi Norville, who gathered the ball near his own line and kicked his side out of danger. A high kick from scrum half Will Bevan took Abbey into the home half, but at this point they lost centre Tom Woodward to shoulder injury. Charlie Gingell replaced him and slotted in on the wing, with fullback Gavin Dampies moving to the centre and Norville to fullback.

Abbey did not help their cause by losing another line-out, and soon after this Nagy kicked a second penalty to put his side 11-0 up.

With the half hour mark approaching Abbey made it up the field when outside half Rob Bryson sent a kick to within 15 metres of the home line. Buckingham hit back at once with a 40-metre maul, before Abbey began their best period of the game.

The catalyst for the revival was Woodward, who ran from the back of a scrum into the home 22. Centre Luke Burns and winger Diego de Marcilla Bahlsen carried on the attack, and after Dampies, Gingell and second row Jeremy Knights all handled, Woodward was halted on the line. The ball was recycled, and after good work from Burns and prop Ollie Charlton, Bryson handed on to Dampies who cut through to the line in typical style. De Marcilla Bahlsen added a good conversion.

At this point Ockendon and Payne both left the field, and Abbey capitalised by scoring again from the restart. Again, Woodward was the inspiration, catching the ball and running 40 metres downfield. Play moved towards the left of the field, where the supporting Dampies sent Shaw over for a great try. Once again De Marcilla Bahlsen added the extras and Abbey were in front.

Abbey looked bright in the opening stages of the second half, with Knights winning good line-out ball and prop Jack Saunders making ground with the ball. Burns kicked his side into the home 22, Knights won another line-out and Woodward and flanker George House both had good runs. But after Abbey conceded a penalty, Nagy sent an excellent kick downfield and Buckingham were back on the attack. A prolonged spell of pressure saw Abbey initially defending very well, with Woodward and flanker Mike Beckly both bringing off important tackles. But even though home winger Daniel Rolfe was temporarily out of action and receiving attention on the field, Buckingham eventually found a way to the line. After Wright came close to scoring, winger Craig Coxon touched down on the left, Nagy converting.

Ed House replaced his brother in the Abbey back row just short of the hour mark, and Dampies, de Marcilla Bahlsen and Saunders tried to mount an attack. House and Bryson took play into the home 22, but a pass from Burns was intercepted, and in the ensuing counterattack Gingell saved a try by stopping fullback Nobby Clarke five metres from the line.

Buckingham continued to attack, and after good work from Chalmers and Rolfe, Wright went over for a deserved score. Nagy was wide with the conversion attempt this time.

Shortly after this, Clarke left the field injured, giving Abbey an extra man advantage for the remainder of the game. Fungai Mutepfa replaced hooker Adam Postlethwaite, but the latter was soon back on the field when Bryson was hurt. This change resulted in Charlton moving to the wing, de Marcilla Bahlsen to scrum half and Bevan to number 10. Abbey had a let off when Nagy was wide with a penalty attempt, and shortly after this de Marcilla Bahlsen missed with a relatively straightforward kick which would have put his side in losing bonus point territory.

Time was against Abbey now. Beckly and Shaw tried to work the ball into the home 22, but Buckingham’s defence was too strong for them. Gingell and Norville ran the ball from their own line, but again the attack came to nothing. De Marcilla Bahlsen then saw a long-range penalty attempt fall just short of the target in what proved to be Abbey’s last chance of further points. Just before the final whistle, Shaw had to leave the field injured, George House returning in his place.