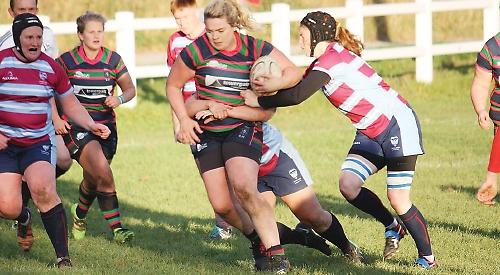 It was a hard-fought display from Abbey, who headed into the game still hurting from their 18-5 defeat to local rivals Newbury Ladies.

Anchored by their solid scrummaging, the Berkshire outfit enjoyed the brighter start as Wimbledon’s indiscipline handed the Nuns’ prime territory during the opening phases.

It lead to Matthews grabbing the game’s opening try in a well-worked passage of play which saw Abbey stretch their opponents using the width of the pitch.

And excellent hands from centres Annabel Hawkins and Louisa Burgham led to Matthews crossing again within minutes of the restart to stun the home side.

Wimbledon rallied and hit back with their own score to peg the Nuns back at 10-5, before King crashed over from close range to restore Abbey’s 10-point lead before half-time.

The second period was characterised by Tomas’s pin-point kicking while fullback Nat Bow staked her claim to skipper Abbey’s second string in their upcoming fixtures this season, proving a constant threat in attack with her fiery runs and heroic cover tackles.

An increase in the Nuns’ work rate saw Tomas tiptoe her way through Wimbledon’s defence to dot down under the posts, with Annabel Hawkins adding the extras to put daylight between the two sides at 22-5.

But Wimbledon would not relent and responded almost immediately from their pacey winger, who cut a fine line off her fly-half to carve open the Nuns’ defence.

In a tense finish Pippa Robinson ran a short line off Tomas to shrug off four defenders and cross for Abbey’s fifth. Replacement centre Kimberley Chandler converted. Abbey enjoyed the final say through a Hawkins penalty.