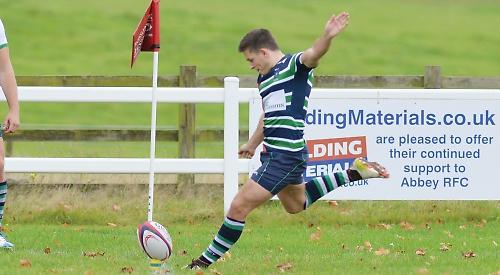 CURRENT form and league position might have suggested that Abbey would be favourites to win the Wadworth 6X Southern Counties North local derby at Holme Park, but they were soundly beaten by a well-drilled Reading team.

The home side was always in control, scoring seven tries and dominating territory for long periods. In contrast, an Abbey team lacking several key players looked out of sorts for much of the game and rarely featured in attack.

It took Reading two minutes to take the lead. Abbey lost their first line-out throw, and centre Alex Murray-Smith burst through the defence and found support from winger Chris Greig-Jenkins who touched down close to the posts. Scrum half Nick Portch added the conversion.

The visitors suffered a blow in the ninth minute when Will Bevan was injured and had to leave the field. In his place, Jules Greenaway came on to play on the wing, with Diego de Marcilla Bahlsen moving to scrum half.

Abbey conceded a penalty under their own posts and Portch put his side 10-0 in front with a simple kick. In 15 minutes of play Abbey had barely seen any possession, and were confined almost entirely to their own half.

Fullback Remi Norville made 15 metres with the ball, taking Abbey as far as the halfway line. Shaw won a line-out, but when Reading regained possession Murray-Smith broke clear again and Greig-Jenkins crossed the line, only to be called back for a forward pass. As the game neared the half hour mark, play was still almost exclusively in the Abbey half. A good tackle from winger Charlie Gingell halted a Greig-Jenkins break, and Shaw did well to stop a sniping run from Portch. Fungai Mutepfa replaced prop Richard King in the Abbey front row. He initially featured at hooker in the scrums, but he soon moved to prop, and when he did so the scrum became steadier.

Just before the end of the first half, Reading were awarded another penalty which ws missed. Soon afterwards Abbey lost the ball on the halfway line, and after Greig-Jenkins got away from Gingell on the left wing, he gave fullback Jos Clarke a scoring pass. Portch could not convert from a difficult angle as the hosts led 15-0 at half-time.

There was a brighter start to the second half for Abbey. Shaw fed Mitchell, who made ground with a good kick, and then Beckly, Ed House and prop Ollie Charlton all handled well. The visitors were awarded a penalty just inside the Reading half, and de Marcilla Bahlsen kicked a good goal.

Reading were soon on the offensive again, with Shaw doing well to halt winger James Mitchell. Portch attempted a long-range penalty in the 47th minute, but his effort dropped well wide of the posts. Shortly after this, Abbey lost Gingell to injury, with his brother Matt coming on in his place. King returned to the field in place of Mutepfa, and de Marcilla Bahlsen had the chance to put more points on the board when Abbey were awarded a penalty in the home 22. Unfortunately, his kick dropped just wide.

Any hopes of a revival were snuffed out when Abbey lost a scrum in their own twenty-two. Greig-Jenkins broke towards the left, and after a smart bout of passing, flanker Taylor McRoberts burst over to score near the posts. Portch’s conversion took the score to 22-3.

Five minutes later the game was put beyond Abbey’s reach when flanker Frazer Koefman was driven over from a line-out. Portch could not convert, but Reading had their bonus point with 15 minutes remaining. Abbey made every effort to up the tempo after this. Mitchell featured twice in a good build-up which also involved good work from de Marcilla Bahlsen and Beckly. Eventually the visitors got in a position where they could drive for the line, and Shaw plunged over for a try which de Marcilla Bahlsen did well to convert from wide on the right.

De Marcilla Bahlsen and Mitchell both worked hard as Abbey continued to attack. Mitchell made 30 metres with a good run and Knights, Greenaway, Norville and Ed House all saw the ball before Mitchell again made ground. Dampies and Greenaway then took play into the home 22, but Abbey lost possession again, and they conceded a try soon afterwards when a kick-ahead from Reading bounced awkwardly. Nobody on the visiting side could collect the ball, and after Koefman had broken clear, replacement prop Steve King charged ten metres to score under the posts. Portch converted to make the score 34-10.

In the dying minutes of the game, Reading scored two more tries in quick succession. First, replacement hooker Alex Watson made a brilliant break from the halfway line, leading to a try for replacement winger Ben Mitchell. Then, with time almost up, McRoberts and Greig-Jenkins set up a score for Alex Dorliac. Portch’s successful conversion ended an afternoon of almost total dominance for Reading.