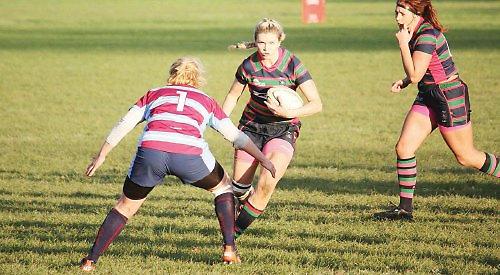 ABBEY Ladies continued their promising start to life in the championship with a 21-14 victory over Cullompton, to register their fifth win of the season, writes Fiona Tomas.

Louisa Burgham scored either side of half-time for the Nuns, while Annette Tomas also crossed.

Kim Chandler enjoyed a fine day from the tee, converting all three of Abbey’s tries to further cement her status as Abbey’s first-choice kicker, despite playing in only her second game of the campaign.

But it was a tale of two halves after the Berkshire side were forced to resist a spirited second-half resurgence from their Devon opponents, who denied third-place Abbey a bonus point.

The result sees the Sonning side sit three points behind fellow rivals Newbury in the table.

It was a bright first-half display from the Nuns, characterised by several strong ball carries from the forwards who thwarted Cullompton at the breakdown, with Abi Wall and Claire Stevens recycling efficiently.

The hosts’ indiscipline led to a well-worked Abbey scrum which saw Tomas break away before side-footing three defenders to score.

And on the cusp of half-time, Burgham – who had earlier been held up short – crossed after a fine backs move to put the Nuns in control.

The centre continued her fine form almost immediately after the break, grabbing her second from a perfectly executed penalty move to lead 21-0.

But Abbey’s much-changed back line – implemented after the break by coach Jack Reynolds – received a stern test from Cullompton, who scored twice in quick succession to set up a tense finale at 21-14.

But the Nuns had enough to see the game out and had their prayers answered when Rice kicked for touch to earn them a valuable away win.