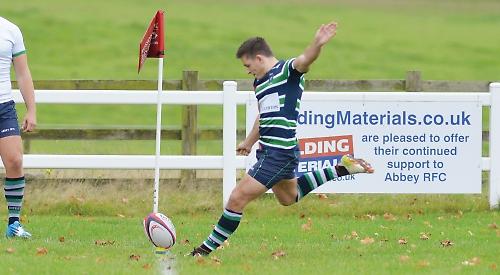 ABBEY had their moments at Wallingford, particularly when they were able to make use of their speedy backs. They scored four tries and looked impressive in the first half but eventually had to give second best to a strong home pack.

Cruel luck with injuries did not help their cause, while three of the visitors were shown yellow cards in the second half.

In a bright start, second row George House won the opening line-out of the game and a long kick from fullback Gavin Dampies took Abbey into the opposition half. A forward drive brought Abbey to the Wallingford 22 and when scrum half Diego de Marcilla Bahlsen was impeded, a penalty was awarded. De Marcilla Bahlsen had no problem in securing the points from an easy position and Abbey led after four minutes.

A poor restart kick gifted Abbey further possession, and soon afterwards they scored a try. The ball was moved to the right, where Dampies cut through into the home half. He then fed winger Remi Norville, who sprinted up the touchline before using his speed and strength to outwit the Wallingford defence as he crossed the line. De Marcilla Bahlsen’s touchline conversion took Abbey to 10-0.

Second row Chris Shaw claimed the restart kick but Abbey lost possession and the Wallingford pack initiated a series of drives. They got closer and closer to the Abbey line and in the 10th minute they got their first try when prop Jack Greenway plunged over in the right corner. Skipper Phil Dawes was unable to convert.

The visitors continued to look confident when the ball was moved wide, and they scored their second try after 14 minutes. Outside half Jack Lambert-Taylor sent a crosskick towards the right corner, and when the home defenders failed to deal with an awkward bounce, Dampies had a clear run to the line. He touched down under the posts, making de Marcilla Bahlsen’s conversion a formality.

Prop Ollie Charlton was then penalised for an offside offence and after a break during which his fellow prop Richard King was treated for an injury, Wallingford took a tap penalty. Again, good Abbey defence initially kept them out but eventually flanker Nathan Chapman crossed to the right of the posts. Dawe again missed the conversion.

Hooker Adam Postlethwaite and skipper Will Woodward had good runs as Abbey tried to stretch the Wallingford defence but when Burns and Dampies attempted to release Norville he just failed to grasp the ball and it went into touch. The subsequent line-out saw Wallingford launch a further attack, and their number eight Ian Jeffreys made a break of 40 metres. He received strong support from the equally impressive second row Carl Tappin, and the latter supplied a scoring pass on the left for winger Ralph Smith. The conversion attempt was missed leaving Abbey ahead by two points.

Now it was Abbey who looked dangerous once more, and after a good build-up from Burns and Dampies, Norville dived over in the right corner for his second try. De Marcilla Bahlsen was just wide with his conversion attempt, but the score was now 22-15 to Abbey after half an hour of play.

Abbey were forced to make a change when King was injured. Mark Toland came on to fill in at hooker, with Postlethwaite moving to prop. Minutes later there was a long injury break while winger Charlie Shackleford received attention, and he was replaced by Jules Greenaway. With the first half almost over, Wallingford scored their bonus point try. Jeffreys got the ball just inside his own half and stormed through a gap in a fine charge to the line. Dampies was able to catch him but he did not have the strength to stop him from touching down for a fine individual score. A change of kicker saw winger Max Suttner add the extras and the scores were level at half-time.

Maurice O’Connell made a welcome return to first team action after a long break. He came on as a half-time replacement for Beckly and made an instant impression with a 20 metre run. Ed House and Shaw gave him good support, and after further useful work from Charlton and Toland, George House was halted just short of the line. Abbey were penalised at the next scrum and there were no further scrums during his absence, but when the binning period ended, it was King who reappeared instead. For much of this period Abbey were at the right end of the field.

The hour mark passed with the scores still level but there were again ominous signs that Wallingford were winning the forward battle. Whenever they drove from a line-out in the visitors’ 22 they threatened to cross the line and eventually managed a fifth try when Chapman ran a good line to touch down under the sticks. Suttner again converted and Wallingford led for the first time. Beckly returned to the action in place of George House, but soon afterwards Abbey lost Greenaway after he attempted to halt another burst from Tappin. With resources already stretched, Charlton had to return and play on the wing.

With less than 10 minutes of normal time remaining Abbey made every effort to get back into the game. It was crucial that Dampies and Norville were given as much ball as possible, and after good breaks from Burns, Shaw, Ross and Ed House, Dampies eventually got possession in space just inside his own half. Away he went towards the right corner, and he timed his pass to perfection to give Norville his third try and bring up Abbey’s bonus point. Unfortunately, de Marcilla Bahlsen was just short of the target with his attempted conversion.

Shaw, Ross and Woodward attacked from the restart, but in two further blows to Abbey’s hopes, Ed House was yellow-carded and de Marcilla Bahlsen left the field with an injury. This involved a further reshuffle of the side, including George House acting as an emergency winger. Wallingford rightly sensed that the game was now theirs for the taking, and they got their sixth try as the game entered injury time, Jeffreys again crossing the line. Suttner’s missed conversion meant that Abbey were still in losing bonus point territory, and there was still time to snatch a draw with a converted try. However, they soon found themselves reduced to 13 men when Toland joined Ed House in the bin and the game ended with Abbey being pushed off their own scrum ball.