Abbey Nuns close in at the top following overseas win 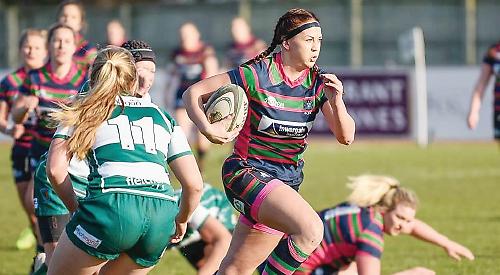 ABBEY NUNS reduced the deficit at the top of Championship South West 2 to three points as they laboured to a 40-19 win against Guernsey, writes Fiona Tomas.

Tries from Sarah Northover, Jess Potter and Lou Burgham gave the Nuns a comfortable half-time lead, but Abbey, in pursuit of a bonus point, were forced to work.

Guernsey reduced the arrears directly after the break, the Islanders scoring two tries in quick succession as Abbey lost their concentration.

And it wasn’t until the final 10 minutes that Abbey wrapped up proceedings, with Natalie Bow touching down before Burgham grabbed a second.

It was a tale of two halves in the Nuns’ first ever league fixture overseas with coach Jack Reynolds targeting the new year as a fresh opportunity to trial several new playing positions, which saw fullback Bow enjoy a positive debut as fly-half.

Abbey started with greater momentum epitomised by good phases of forward work, which proved the perfect platform for Northover to dot down on the wing, before Potter crashed over minutes later.

Kim Chandler produced a fine display from the tee, kicking all but one of her side’s conversions, but when prop Hollie King saw yellow for offside play, the hosts capitalised and pulled a score back after a period of frantic defending from Abbey.

With King back on, Burgham wasted no time in increasing the Nuns’ lead, dotting down after weaving through Guernsey’s defence, before Matthews crossed to send the Nuns in at the break with a 26-7 advantage.

But the Islanders stormed out of the blocks at the start of the second half, scoring two unanswered tries as Abbey lost their concentration which prompted Reynolds to make adjustments.

Flanker Pippa Robinson and prop Harriet Driver both returned to the fold after lengthy spells on the sideline – and their experience among the forward ranks soon steadied the Abbey ship.

The Nuns rediscovered their attacking form, with Abi Wall and Meaghan Fowler both running good lines and with cleaner offloading.

It meant Abbey pushed on during the last 10 minutes with Bow topping off a fine individual performance with a try of her own, before Burgham secured her brace, with Matthews adding the extras. The win sees Abbey keep the pressure on league leaders Newbury, as the two sides lock horns in what promises to be a crunching Berkshire derby in the battle for top spot on January 28.

• Abbey Nuns are looking for women to step outside of their comfort zone, embrace their #InnerWarrior and try out rugby tomorrow (Saturday). For more details on how to get involved, visit www.EnglandRugby.com/
InnerWarrior