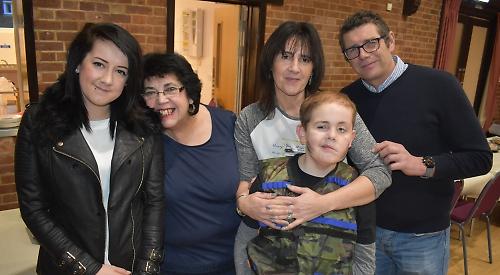 A BOY who was given only weeks to live three years ago has celebrated his 11th birthday.

Charlie Ilsley has been in remission since March 2016, a year after having a brain tumour about the size of a snooker ball removed.

He is maintaining a healthy weight and his hair is steadily growing back and his parents, Toni and Mark, are delighted with his progress.

Charlie, of Buckingham Drive, Emmer Green, was diagnosed in March 2015 and doctors warned his family about his life expectancy before removing the 4cm by 4cm growth.

Following the operation, he was in and out of hospital for months as he underwent four bouts of chemotherapy.

Now he needs scans only every six months with the next one due later this month.

His birthday was on Sunday but he celebrated the day before with a foam gun party for about 20 friends from The Hill Primary School in Emmer Green at Shiplake Memorial Hall.

There was party food and in the evening a band performed for family and friends. Mrs Ilsley, 48, who works at the Day Lewis chemists in Sonning Common, said: “Charlie’s getting better and he’s getting stronger. He’s not just alive, he’s enjoying life.

“I think he struggles with school work but my hope is that he gets through school alive, makes friends and is happy.

“I don’t care what exams he passes, I’m just happy he’s alive and that he has friends and a social life. This has taught us to live day-by-day and not to take life for granted — you never know what’s going to happen tomorrow.

“We were cruising along in life, our little family, and then that happened. It could happen to anyone.

“Now life revolves around making Charlie better. We try to do something every month to allow him to enjoy life.”

When Charlie finished his chemotherapy treatment in January 2016 he weighed just over four stone but now he weighs more than 8st.

Mrs Ilsley said: “We have to inject him every night with a growth hormone and it’s working. His scans have all been fine and they have just moved them to six-monthly.”

Charlie has hydrotherapy treatment once a week at the Royal Berkshire Hospital in Reading and a swimming lesson once a week at Highdown sport and leisure centre in Emmer Green.

He also has regular soft tissue therapy sessions with therapist Isabelle Brough in Henley and his family are investigating the possibility of a hair transplant.

During his operation a nerve was severed that has affected the left side of Charlie’s face so in June last year surgeons at the John Radcliffe Hospital in Oxford took a nerve from the back of his leg and threaded it into his face in the first phase of “facial reanimation” surgery.

He will undergo the second stage in June this year when a nerve will be taken from his inner thigh.

Towards the end of last year he had a platinum weight fitted above his left eye to help it close and prevent it from drying out. Mrs Ilsley said: “Charlie is getting older now and he’s asking when his hair’s going to come back.

“He knows he looks different and I think he feels a bit isolated. School friends, I think, can run faster than him and do stuff he can’t so he feels a bit left out.”

Charlie’s grandmother Linda Hall, who lives in Binfield Heath, said: “I just think it’s so amazing the treatment Charlie’s had and we love the surgeon.

“We just don’t want it to happen to any other little boy — we want people to know the symptoms.

“I know it’s two years but there are children for whom it comes back. When you get that diagnosis you’re never safe.

“The whole family has been through something you don’t want to happen to anybody else.”

Charlie, his parents and brother Ollie enjoyed a trip to Florida in October where they stayed in a villa provided by the Children’s Charity.

Mrs Ilsley is running the Reading half marathon on March 18 to raise money for the charity and the Danny Green Fund, which pays for Charlie’s soft tissue therapy.

The fund was set up in memory of a 10-year-old boy from Essex who was diagnosed with an aggressive brain tumour in 2011 and died the following year.

Mrs Ilsley said: “So many lovely charities have helped Charlie so it’s nice to give something back. You feel like you should.

“I do 10 miles every Saturday so I should be able to do a half marathon.”

Meanwhile, she remains vigilant and on the lookout for the side effects of Charlie’s treatment.

Mrs Ilsley said: “After five years, the chance of it coming back is smaller but there are other cancers you have to watch out for because of the radiotherapy.”