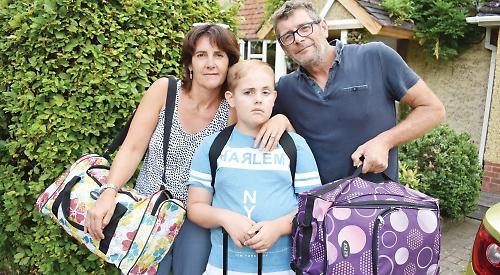 A BOY whose cancer has returned has flown out to a hospital in Turkey for revolutionary treatment which could save his life.

Charlie Ilsley, 11, flew out to Ankara with his mother Toni and father Mark on Wednesday to undergo CyberKnife treatment, the latest radiotherapy technology, in an attempt to eradicate two tumours on his spine.

The family have launched a £35,000 appeal for the treatment and have raised almost £14,500 so far. They are desperate for him to have the treatment as soon as possible before his condition worsens.

Charlie, who lives in Buckingham Drive in Emmer Green, had been in remission since March 2016, a year after having a brain tumour about the size of a snooker ball removed. When discovered, doctors said he might have only weeks to live and he was in and out of hospital for months as he underwent four bouts of chemotherapy before being given the all-clear.

But in March this year the Ilsleys received the news they had been dreading after the tumours on his spine were discovered. This month another scan revealed they had doubled in size and now measure almost a millimetre each.

Further radiotherapy treatment has been ruled out and their son began a six-month course of chemotherapy but this had no impact on his cancer.

Mrs Ilsley, who works at the Day Lewis pharmacy in Sonning Common, said: “You just go into shock for maybe a day and you feel numb and hollow.

“He had four lots of chemotherapy but we have stopped that because it wasn’t having any effect. He’s not having any treatment at the moment.”

She would prefer to have her son treated in the UK but says CyberKnife is not available at the John Radcliffe Hospital in Oxford, where he has previously undergone treatment.

“It’s not available in the NHS for children here but it could save his life — it’s a chance. If we stay here they are happy to give him some chemotherapy but I feel like I need to act now while Charlie’s still well. For me it’s a case of saying ‘okay, we fight again’. My family have been brilliant, everyone is fighting for Charlie.”

Her son, who will start at Highdown School in Emmer Green in September, will now undergo the one-off procedure at the Memorial Hospital in Ankara and the hospital is able to accept payment as the treatment progresses.

This enables a robot to reposition the radiotherapy beam during treatment in order to minimise damage to healthy tissue. The CyberKnife moves with the patient’s breathing and can track a moving tumour. Because of its pin-point accuracy, it allows larger doses of radiotherapy to be delivered, meaning that the patient requires fewer hospital visits.

Mrs Ilsley said: “It’s a fantastic way of treating kids but I don’t really want to go to a different country with Charlie.

“It’s not an experimental treatment, it’s what they use for other children. We’re saying we’re not going to give up on him when there’s treatment available.”

She added: “He’s perfectly ok in every other way — no symptoms, enjoying life. I never would have known that it had come back. He’s exactly the same and full of energy and not one pain or complaint.”

Charlie first showed signs of being ill in March 2015 when he started being sick in the mornings. After a CT scan, doctors discovered the tumour in the back of his brain.

He underwent a 10-hour operation in April that year in which his tumour was partially removed. Another tumour was found on his spine. Immediately after the operation Charlie spent three days in intensive care, where his brain activity was monitored, and then almost another three weeks before returning home.

He was back in the hospital a few days later, when his stem cells were harvested over several days in preparation for his chemotherapy treatment. He then underwent 31 sessions of radiotherapy to his head and spine at the Churchill Hospital in Oxford.

A spokeswoman for the Oxford University Hospitals NHS Foundation Trust said: “We can’t comment on individual patient cases because we have a duty to maintain patient confidentiality.