Defibrillator installed in former call box in memory of GP 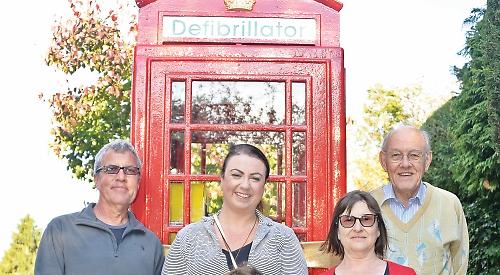 A PUBLIC access defibrillator has been installed at a disused telephone box in Emmer Green.

The life-saving device, which can shock a person’s heart back into a normal rhythm if they go into cardiac arrest, was officially unveiled by Reading East MP Matt Rodda on Friday.

It cost about £2,000 and was paid for through a fund-raising campaign organised by members of the Emmer Green Residents’ Association.

The money was raised with door-to-door collections and a sizeable donation made by Isabel Hatcher, from Glasgow, to commemorate her late uncle Dr Arthur Davidson, a retired GP who lived nearby in Burnham Rise.

Mrs Hatcher travelled from Scotland to attend the ceremony and helped Mr Rodda cut the ribbon. Dozens of guests enjoyed snacks and drinks before speeches by the MP and project leader David White who thanked everyone who had supported the campaign.

Last year, the association conducted a survey when BT announced that the 1935 K6 kiosk in Courtenay Drive was to be pulled out of service as it was no longer viable due to low usage.

The ownership was then transferred to the association under Reading Borough Council’s supervision.

The residents purchased the defibrillator through the Community Heartbeat Trust, which supplies them for phone boxes across the UK and will provide training. Residents will maintain and check it is still working on a weekly basis.

The device is kept in a locked box, the code for which can be provided by 999 operators, and is fully automated.

Mr White, who lives in Burnham Rise, said: “We looked at various ways to keep this box in use and the defibrillator was the most popular suggestion.

“We’re very grateful for Isabel’s donation as we wouldn’t be here without it.”

The box, which was built to commemorate the silver jubilee of George V, was in poor condition so Mr White replaced most of the glass panes, repainted it and installed new signage.

He said: “It was in a pretty poor state and took more than 50 hours but it’s great to have completed it.” Mr Rodda said: “My children often joke that I’m from the Stone Age but I remember payphones well and it’s lovely to see this historic item being kept alive and in a way that benefits the community.

“It is a fantastic achievement for the association and and I hope to persuade other groups in this area to do the same.”

Mrs Hatcher said: “You obviously hope nobody will ever need to use it but it’s good to know it’s there. I’m really thankful to have been invited.”

The telephone box at the junction of Clifton Park Road and Albert Road, Caversham, was also taken out of service and was set to be adopted by the Caversham and District Residents’ Association but this deal fell though.