Boy back in Turkey for treatment 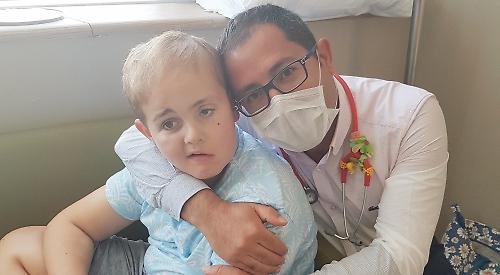 THE parents of a boy fighting cancer will find out this month if specialist treatment has been successful.

Charlie Ilsley, 11, flew to Ankara with his parents Toni and Mark to undergo CyberKnife treatment in an attempt to eradicate two tumours on his spine.

The treatment, which is the latest in radiotherapy and delivers a high dose with pinpoint accuracy, is not available to children at the John Radcliffe Hospital in Oxford, where he had surgery previously.

Charlie had the treatment in August followed by chemotherapy before returning to Turkey last month for a second round of chemotherapy. He has suffered no side effects.

He will return for his third session on Sunday, when he will also have an MRI scan to see if the tumours have shrunk.

The family, who live in Buckingham Drive, Emmer Green, face a further three trips to Ankara in order to complete the chemotherapy treatment.

Mrs Ilsley said: “It’s still a struggle. I think if we get the MRI results and it says it’s working that changes your whole perspective.

It’s the unknown at the moment — you don’t know if it’s helping. I’m worried about that. I’m always worried they are going to say it’s everywhere but he hasn’t got any symptoms and he’s well, which is a good thing.”

A lumbar puncture, performed during Charlie’s last visit to Turkey, showed his spinal fluid was clear.

Mrs Ilsley, who sleeps in a chair at her son’s bedside, said: “It’s going to take us a few times to get it right.

“Charlie feels the days go really slowly over there because he has not got a huge amount to do. He’s stuck in the one room but now we have got some games and a really old Xbox to take.”

She is learning to speak Turkish and said: “I pick up languages really well and what I learn I don’t ever forget. I speak to the nurses in Turkish.”

Charlie, who started at Highdown School in Emmer Green last month, first showed signs of being ill in March 2015.

Doctors discovered a tumour about the size of a snooker ball in his brain. Another tumour was found on his spine.

He then underwent 31 sessions of radiotherapy followed by chemotherapy before he was given the all-clear in March 2016.

Then in March this year the tumours on his spine were discovered.