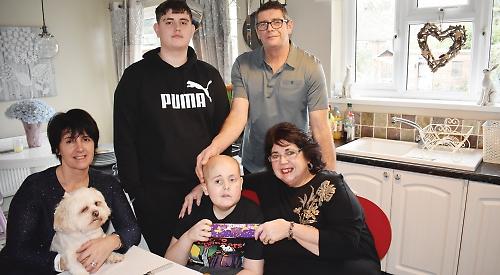 A BOY battling cancer enjoyed a belated Christmas dinner with his family after spending more than five weeks abroad having treatment.

Charlie Ilsley, 11, was stuck in Turkey with his mother Toni over the festive period and New Year.

He was due to have chemotherapy and his stem cells harvested but caught a bad cough soon after they arrived in Ankara on December 2 so the process was delayed.

They finally returned home to Buckingham Drive, Emmer Green, last week and enjoyed Christmas dinner with turkey and all the trimmings on Saturday with Charlie’s father Mark and brother Ollie, 21, sister Jess, 29, and other relatives.

However, it was only a short stay as Mrs Ilsley and Charlie returned to Ankara on Monday for another round of chemotherapy.

After his last treatment on December 19 the whole family were able to stay in a hotel next to the Ankara Memorial Hospital on Christmas Eve and Christmas Day.

But Charlie had to go to the hospital twice a day to be given medicine that forced his stems cells out of the bone marrow and into his bloodstream so they could be harvested. The cells will be reintroduced to help boost his immune system after his final high-dose bout of chemotherapy next month.

Mrs Ilsley said: “We thought to ourselves ‘let’s just forget Christmas while we’re here’. We went out for a meal on Christmas Day and it started snowing so we had a white Christmas, which was lovely. Charlie loved it.

“It was just nice to have a bed at the hotel. I hadn’t slept in a bed for three-and-a-half weeks. You don’t know how much you miss a duvet!”

The family returned to the hospital on Boxing Day and Charlie continued to have a drip twice a day. Doctors would take blood every day to see if his stem cell count was high enough.

Mrs Ilsley said: “When the doctor said we might not get his stem cells I was really upset because the high dose is his best chance.

“Every time you have chemotherapy it makes your bone marrow tired and Charlie has had a lot of chemotherapy. Every morning you think this might be the day where we can collect the stem cells and go home.”

On Tuesday last week his stem cells were finally collected using a machine which separates them from the plasma. The process took about five hours.

That evening Mrs Ilsley booked a flight home for the next day and she and her son landed at Gatwick airport at about 9pm.

She said: “Charlie said he wanted to get down and kiss the ground.

“We were both really tired because we didn’t get home until midnight. I said to Mark ‘don’t wake me up early’ but we were still on Turkey time so Charlie was up at 6am to open his Christmas presents.”

His gifts included a boxing punchbag from his parents to help improve his strength in his left side, computer games and chocolate.

She said: “I don’t mind cooking and roasts are probably one of the easiest things to do. Charlie wants Christmas dinner and it makes me feel good because I’ve done it for him.

“We’re not home long enough to start thinking, ‘I really don’t want to go back’. We’ll be back again before we know it.”

Charlie’s final chemotherapy treatment will be followed by blood and platelet transfusions and reintroduction of his stem cells.

Mrs Ilsley said: “It’s mixed feelings because I’m scared but I want it. This is what we asked for in the first place — we wanted the high dose of chemotherapy because I know it’s the only thing that could possibly help Charlie.

“I hope we’re back for his birthday on March 4.”

Charlie first showed signs of being ill in March 2015. Doctors discovered a tumour about the size of a snooker ball in his brain. Another tumour was found on his spine.

Then last March two tumours on his spine were discovered and he had CyberKnife treatment, the latest radiotherapy technology, in Turkey.

More than £32,000 has been raised towards the £45,000 cost of Charlie’s treatment and the family’s flights but they need to raise another £41,000 for the stem cell treatment.