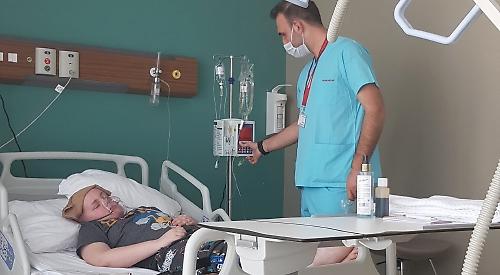 A BOY battling cancer has had his final bout of chemotherapy and could return home this week.

His last MRI scan showed that only a tiny amount of cancer remained on his spine and it is hoped the last high dose of chemotherapy will eradicate this.

The treatment at Ankara Memorial Hospital took seven days and weakened Charlie’s immune system so much that he and his mother Toni had to stay in an isolation ward for several weeks.

He then had a stem cell transplant to help boost his immune system and is now waiting for his bone marrow to recover before he can fly home to be with his father Mark, a builder, and the couple’s other son, Ollie.

Speaking from Istanbul, Mrs Ilsley told the Henley Standard: “It has been really hard, probably one of the hardest things I’ve had to do so far. It was Charlie’s birthday on March 4 and mine on March 8. We will celebrate when we come home.”

She said the treatment had gone smoothly but Charlie developed mucositis, a painful inflammation and ulceration of the mucous membranes lining the digestive tract. This is a common side effect of chemotherapy and radiotherapy. His face also swelled up as a result of all the fluids he was given.

Despite this, he still managed to watch YouTube videos and talk to his friends online.

Mrs Ilsley said the doctors were pleased with his progress.

Charlie, a pupil at Highdown School in Emmer Green, first showed signs of being ill in March 2015. Doctors discovered a tumour about the size of a snooker ball in his brain. Another tumour was found on his spine.

He then had 31 sessions of radiotherapy followed by chemotherapy before he was given the all-clear in March 2016. But in March last year two tumours on his spine were discovered and he had CyberKnife treatment, the latest radiotherapy technology, in Turkey.

This is not available to children at the John Radcliffe Hospital in Oxford, where he’d had surgery and chemotherapy previously.

More than £35,000 has been raised towards the cost of Charlie’s treatment, the family’s flights and for the stem cell treatment but more is needed.

• Charlie has had his wish to swim with dolphins granted by the children’s charity Rays of Sunshine. He will be flown with his family to Florida next month.