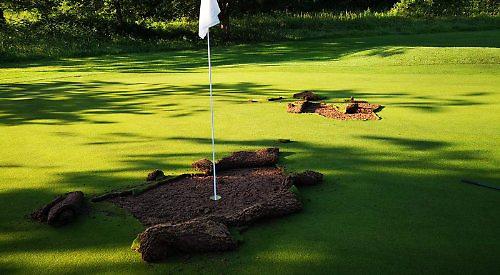 A GREEN at a golf club was vandalised twice in a week.

In the first incident turf on the green was ripped up during the night of Sunday, June 30.

Four days later, the green was damaged in two places.

The club recently confirmed it had agreed to sell all its land for housing and members have speculated that it was deliberately targeted.

It has organised dog patrols around the 110-acre course to prevent another attack.

General manager Gary Strangoe said: “This has created a lot of shock around the golf community. People are horrified.

“This was not just someone walking past as this is quite a removed part of the golf course.

“I think the members are kind of frustrated and quite angry about it. We spend a lot of money preparing the golf course.

“It’s in particularly good condition at the moment and the greens are the jewel in the crown. For the green staff to be met with that on seperate mornings is quite demoralising and disappointing.

“There’s a lot of speculation as to why people would do this but I’m not getting involved in it. There could be a number of reasons. Why does vandalism take place at the best of times?

“Because it has happened a couple of times it obviously appears to our members that we have been deliberately targeted.

“We would love to know someone’s justification for such an action being carried out.

“What has been achieved by it? It seems pointless, completely pointless. We do not understand.

“For me personally it’s about the staff and members. I have not known anything like this at Reading in my time and I have been associated with the club on and off since 2013.”

Mr Strangoe said the disruption to players was minimal as staff were able to repair the green quickly on both occasions.

He said: “Our green staff have made good the repairs. They have done a fantastic job in repairing it but it’s just unfortunate that we have had this situation. It takes time and labour to repair it.

“It’s not the cost of it, it’s the ferocity of the attack and the fact someone felt they had to do that.”

Mr Strangoe said the vandalism had been reported to the police.

“They are aware of it and are keeping an eye on the situation,” he said.

Last year, members agreed to sell the club’s 96 acres for development and merge with Caversham Heath Golf Club, which occupies land owned by the Mapledurham Estate. It will vacate the site by March 2021 at the latest. The club is working with Fairfax Acquisitions, of West Sussex, which hopes to build up to 700 homes on the land.

Almost four acres of the site are earmarked for 130 homes in Reading Borough Council’s local plan. The rest of the site was put forward as a “strategic housing site” in South Oxfordshire District Council’s new local plan but it was not included in the final document.

The club has not revealed how much it would receive from the sale of the land but says it would use some of the money to fund its move.

Thames Valley Police confirmed they were investigating and appealed for anyone with information to contact them on 101.