Charlie given the all-clear 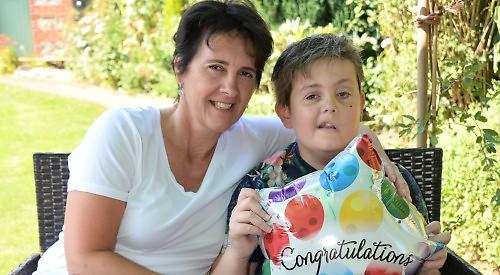 A BOY who has spent months fighting cancer for a second time has been given the all-clear.

Charlie Ilsley, 12, underwent £100,000 worth of specialist radiotherapy and chemotherapy in Turkey to eradicate two tumours on his spine.

The treatment, which finished in March, was not available at the John Radcliffe Hospital in Oxford, where he had surgery previously, so his family had to raise the money to pay for it.

Charlie had previously been successfully treated for a brain tumour but relapsed in March last year.

Now his parents, Mark and Toni, of Buckingham Drive, Emmer Green, have been told that an MRI scan showed the disease has disappeared and their son is in good health.

Mrs Ilsley received the news in a phone call from his consultant after Charlie had the scan at the Royal Berkshire Hospital in Reading earlier this month.

She said: “He said not only had the cancer completely gone but they were amazed by how well Charlie is.

“He has got no cancer at all — they call it no evidence of disease.

“I was sure this treatment was going to work and when he told me it dawned on me that I had done the right thing taking Charlie to Turkey.

“I sat there for an hour ringing people saying ‘it’s gone’ and I then thought, ‘I better go and tell Charlie!’

“I ran upstairs and told Charlie: ‘We did it, it’s gone, you haven’t got any cancer’. He was talking to all his mates on his X-box and he looked at me and said, ‘All right, mum, calm down’ and put his headphones back on and carried on playing!

“It had probably been the hardest week of my life because so much relied on this scan and I had to wait 11 days for the result.”

The good news came on Thursday last week, the day before Mr Ilsley had surgery after being diagnosed with cancer himself.

Mrs Ilsley said that, fortunately, her husband’s cancer had not spread and he would not require chemotherapy or radiotherapy.

Doctors discovered a tumour about the size of a snooker ball in his brain. Another tumour was found on his spine. He underwent a 10-hour operation in April that year in which the brain tumour was partially removed.

Then last spring two tumours on his spine were discovered.

His mother was so worried about losing Charlie that she took him to Turkey for treatment after finding out about researching the CyberKnife radiotherapy.

The Oxford University Hospitals NHS Foundation Trust, which manages the John Radcliffe Hospital, said the treatment was only available to adults.

Charlie spent months last year and earlier this year going back and forth to hospital in Ankara for his treatment in periods of several weeks.

When that finished, he had to have immunotherapy treatment in Germany. This will help his body fight the threat of the disease returning.

He still has to have another four sessions but it’s hoped his treatment will finish early next year.

Mrs Ilsley paid tribute to her son’s courage since his first diagnosis.

“He has never really worried about it,” she said. “Like me, he doesn’t sit there thinking, ‘oh my God what if’. He’s really chilled and relaxed about it.

“He’s so brave and strong and he has definitely surprised all the doctors, especially in this country.

“He just wants to be a normal boy.”

Charlie is now looking forward to a week-long family holiday in Florida, where he will swim with dolphins.

His next scan will be in November.

“It will always be at the back of my mind but at the moment I can say 100 per cent he hasn’t got cancer.

“I don’t have to take him for more awful treatment and I haven’t got it on my mind that’s he’s going to die.

“Next year he’s going to be a five-year survivor.”

She added: “I can’t remember Charlie before cancer, which is quite sad.

“He looks different and sometimes he’s lying in his bed with his wig on and it takes me aback.

“I think, ‘that’s Charlie and what he would have looked like if he hadn’t gone through this’.

“I’m just so glad that I took Charlie to Turkey. It never would have been the wrong decision even if it hadn’t worked because I would always have to do everything I could. I was never going to give up on Charlie.”

The Ilsleys paid for their son’s treatment in Turkey as it progressed and raised £70,000 from donations and borrowed another £30,000.

Charlie’s treatment in Cologne cost £40,000, including flights, and his family still needs to raise another £30,000.

To make a donation, visit www.gofundme.com/f/immunotherapy-for-charlie