Charlie cries with joy at holiday 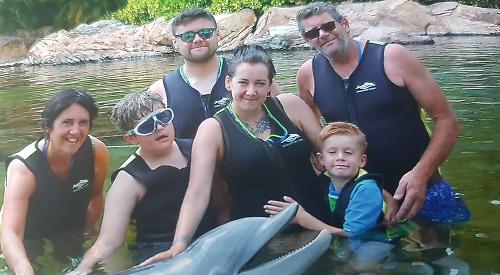 A BOY who has beaten cancer twice celebrated with a dream holiday in Florida with his family.

Charlie Ilsley, 12, of Buckingham Drive, Emmer Green, spent a week in Orlando with his parents Mark and Toni, brother Ollie, 22, and sister Jess, 30, and her son Billy Buswell, six.

He swam with dolphins, stingrays and tropical fish, went horseriding and visited the Universal Studios.

The trip last month was made possible by the children’s charity Rays of Sunshine.

Mrs Ilsley said: “I think it was probably the best time Charlie has ever had. He loved swimming with the dolphins and he spent about half an hour with them.

“It’s the first time he’s ever snorkelled so he loved going in with the stingrays and the fish.

“We enjoyed every single moment of watching him just have fun. We made memories that are going to last forever. It was paradise.”

Mrs Ilsley arranged the trip in December when she and her son were in hospital in Turkey over Christmas while he underwent specialist radiotherapy treatment to eradicate two tumours on his spine.

At the time Charlie was due to have his stem cells harvested but caught a bad cough so the process was postponed until he was well enough and he and his mother ended up staying in the country for five weeks.

The family had to raise £100,000 to pay for the treatment, which was not available at the John Radcliffe Hospital in Oxford, where he had previously been successfully treated for a brain tumour.

The treatment finished in March and Charlie was given the all-clear in August following a scan.

Mrs Ilsley said: “The trip had been planned but we needed to get the scan out of the way first.

“We got the first scan result in March, when the doctor said it was stable, and then we came home and I thought, ‘we might make it to Florida depending on the August scan’.”

During the family’s wait, Mr Ilsley was also diagnosed with cancer but he had treatment and was then given the all-clear as well.

“Nothing was going to make us unhappy — we had too much good news. It was nice to get away and spend time with my family and watch them enjoying themselves.”

The party stayed in a villa at the charity’s Give Kids the World Village, an 84-hectare resort in Orlando run by volunteers.

The family spent their first full day around the swimming pool but the next day went to the Universal Studios and the following day to Discovery Cove.

Mrs Ilsley said: “Discovery Cove is like a tropical paradise. You have got the pool where you swim with dolphins, another with string rays, sharks and tropical fish and a lazy river where there’s birds and monkeys.

“Charlie swam with the dolphins and fish. He loved that and he cried when we had to come home and he’s still asking me ‘when can we go back to Discovery Cove?’” Back at the village Charlie was given a gold star to write his name on which was then taken by a “fairy” in a “castle”. Mrs Ilsley said: “You go back the next day and on the ceiling of this castle are 160,000 of these stars from all the sick children.

“Charlie’s star was put on that ceiling and it’ll be there forever.

“They give you a matching one to take home. It’s in his bedroom so when he wakes up it reminds him of the trip.”

Charlie also met Father Christmas at one of the different themed evenings.

The family enjoyed another day by the pool before flying home the next day.

Mrs Ilsley said: “It was so nice for him to be there. He was not having treatment, no one was hurting him and he hadn’t got cancer. He was just a normal kid. He was crying because he wanted to stay. It was 95F every day. If you went on a ride by the time you got to another one you had to sit down and have a Coke it was so hot.

“Everything a parent wouldn’t want their children to eat is there for kids — you can have a banana split for breakfast.

“We loved it and Mark put on nearly two stone.

“It was really special and not something we could ever afford. Being together in a place like that having a lovely holiday was a dream.”

Doctors discovered a tumour about the size of a snooker ball in his brain and another on his spine.

He underwent a 10-hour operation in April that year in which the brain tumour was partially removed. He then had 31 sessions of radiotherapy followed by chemotherapy before being given the all-clear in March 2016.

Then in spring last year two tumours on his spine were discovered.

His mother was so worried about losing Charlie that she took him to Turkey for treatment after researching the CyberKnife radiotherapy.

Charlie spent months last year and earlier this year going back and forth to the hospital in Ankara for treatment.

When that finished, he had to have immunotherapy treatment in Germany to help his body fight the threat of the disease returning.

Charlie returned to Germany this week for more treatment and will have another scan next month.

The next fundraising event will be a Halloween party at Reading Golf Club in Emmer Green on November 2 at 7pm. There is space for 120 people. For tickets, which cost £5 each, call Mrs Ilsley on 07845 908589.