Last chance for Charlie as cancer may have returned 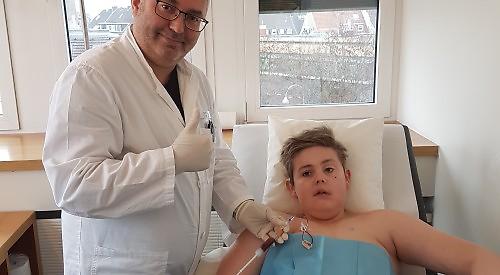 THE mother of a boy whose cancer is feared to have returned for a third time says he has one last chance to beat the disease.

Charlie Ilsley, 12, of Buckingham Drive, Emmer Green, was given the all-clear for the second time in August but his mother Toni was told last week that the cancer looks to have returned to his spine.

She says her son cannot have anymore chemotherapy, after he had months of intense treatment in Turkey, as his body couldn’t take anymore.

Mrs Ilsley, Charlie and her other son Ollie, 22, are currently at a hospital in Cologne where he is undergoing a different kind of immunotherapy in the hope of saving his life.

The treatment, called dendritic immunotherapy, should programme his body to identify and fight cancer cells and Charlie will have three sessions.

She explained: “He said, ‘I’ve had a look at the scan and there’s something showing’.

“I said to him ‘is it cancer?’ He said it wasn’t clear because of the treatment Charlie had in Turkey and wanted other professionals to take a look. On the Wednesday morning I got a phone call to say someone else had looked at it. They were pretty sure it was disease and they wanted my husband Mark and I go up to the John Radcliffe.

“We went and he showed us the scan and said he was 99.9 per cent sure it was disease but they wanted to do a lumbar puncture to rule out any inflammation from the treatment Charlie had in Turkey.

“He had a lot of injections in his back and a lot of chemo so there is a one per cent chance it could be inflammation.

“I went home and kind of thought, ‘this is it, he’s not going to make it’.

“Wednesday, Thursday and Friday were the worst days of my life. I wasn’t sleeping and I couldn’t eat — in three days I lost half a stone.

“They are saying your child is dying but he’s playing upstairs on his PlayStation with his mates. I thought, ‘this disease just isn’t going to leave him alone’.

“You get a clear scan and then it comes back. It’s like a s*** rollercoaster. One minute everything is brilliant in the world and then it’s a living hell. I just felt so sorry for Charlie, thinking he might not make his 13th birthday and I would not see him grow up. I didn’t want anyone to touch him, I just wanted him to enjoy what time he has left.”

But first she had to raise £20,000 for the first session. She called Nicolas Roach, chairman of Nicolas James Group, which owns the Harbour Hotels Group, who had previously donated £20,000 towards Charlie’s treatment.

He gave Mrs Ilsley another £7,500 while an online fundraising drive led by Claire Brown, from Cheltenham, has seen thousands more donated by the public.

The family flew to Germany on Monday from Heathrow Airport and Charlie began his treatment the following day.

Mrs Ilsley explained: “They take about 20 bottles of Charlie’s blood and take it to the lab. They take out Charlie’s dendritic cells and programme them to find and attack the cancer. On the last day they put this vaccine that’s tailored to Charlie back into his body and we have to repeat this every three weeks.

“It should make his immune system recognise the cancer cells and attack them.”

Charlie will also have a vaccine that will make the cancer cells “visible” so that they can be recognised by his body. His scan has been sent to his doctor in Turkey.

Mrs Ilsley has chosen not to tell her son his cancer has returned and said: “I can’t tell him because it’s not fair. I’ll do the worrying. There’s nothing I can do, I’ve got no control. All I can do is find these new treatments. I just wish it was me instead.”

Doctors discovered a tumour about the size of a snooker ball in his brain and another on his spine. He underwent a 10-hour operation and then had radiotherapy and chemotherapy before being given the all-clear in March 2016.

Then in spring last year two tumours on his spine were discovered. His mother was so worried about losing Charlie that she took him to Turkey for CyberKnife radiotherapy treatment.

Charlie spent months going back and forth to the hospital in Ankara for the treatment.

When that finished, he had immunotherapy treatment in Germany to help his body fight the threat of the disease returning.