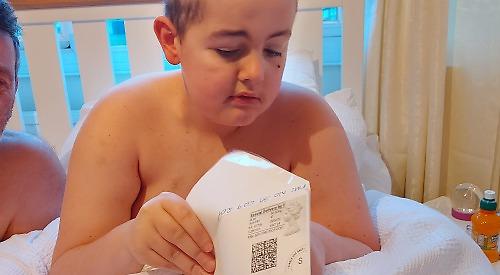 A BOY fighting cancer for the third time has celebrated his 13th birthday.

Charlie Ilsley, of Buckingham Drive, Emmer Green, received about 40 cards from friends and family as well as well-wishers he doesn’t know who have been following his story on social media.

Many gave him cash or vouchers for his big day, including a £120 Amazon gift card from Issi Briggs, which he spent on a wireless gaming headset and a pair of trainers.

He was given a chocolate hamper by Linda Ryan, a sweet bouquet from the Flower Shop in Caversham and ukulele lessons by Claire Brown, from Cheltenham, who has led the online fundraising drive for Charlie’s treatment.

Supporters on his Stand Up to Cancer Facebook page, organised by Mrs Brown, raised money via an online raffle to send Charlie, his mother Toni and best friend Toby King to Center Parcs Elvenden Forest, near Thetford, Norfolk, next week. Tweedy’s Cakes, from Maidenhead, made a cake in the shape of his favourite gaming machine.

Mrs Ilsley and her husband Mark bought their son wireless headphones, pyjamas, a memory game and a Fortnite hat.

In the evening the family enjoyed a meal out at the Cosmo restaurant in Reading where the staff sang Happy Birthday to Charlie.

Mrs Ilsley said: “He really enjoyed his birthday. He got all this other stuff from random strangers.

“People were just knocking on the door and leaving cards. He must have got 35 or 40. There was one that said ‘you don’t know me, Charlie, but I follow you on Facebook’ and it had £10 in it.

“It’s really lovely and it gets you — you forget that there are so many people who are supporting him all the time.”

Mrs Ilsley, who turned 50 on Sunday, said her celebration was a more low-key affair as she is currently in training for the Reading half marathon on April 5.

She said: “For my birthday some flowers came with a little card that said ‘from one mother to another’.

“It’s the little things like that that make you realise, ‘Oh my God, so many people are behind us’.”

Charlie was due to have another scan on Wednesday at the John Radcliffe Hospital in Oxford to see if his treatment has been effective.

He has been alternating his chemotherapy treatment at the hospital and a Harley Street clinic in London with time off in between.

In January, doctors at the John Radcliffe inserted an Ommaya reservoir under his scalp so that chemotherapy drugs could be delivered directly to his spine, where he had two tumours removed. Mr and Mrs Ilsley had feared Charlie couldn’t have any more chemotherapy after months of intense treatment at a hospital in Ankara.

But they say the new procedure, which has been funded by the NHS, offers them hope without Charlie having to suffer the serious side effects he experiences when chemotherapy is administered normally.

Meanwhile, he is undergoing a MEMMAT trial in London, a multi-drug treatment that can be administered in high doses directly into his spinal fluid.

Mrs Ilsley said studies had found the treatment could be anything from 10 to 100 times stronger than the high dose treatment her son had previously received in Turkey. She said her son was handling the treatment well and had no side effects.

Later this month staff at Heathrow Airport will hold a fundraising day for Charlie and he has been invited to go behind the scenes.

He has been undergoing treatment on and off since he was first diagnosed in 2015 with a brain tumour and was given the all-clear twice only for cancer cells to be discovered in his spinal fluid in November.