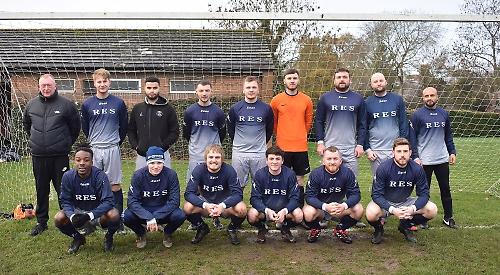 JAMES BOZARTH scored his second hat-trick of the season as EMMER GREEN completed a 7-1 drubbing away at TILEHURST YM in the Senior Division of Reading and District Sunday League.

The visitors were in control from the start and they took the lead on 15 minutes when Bozarth tucked home a Lorenzo Medford assist.

Captain Daniel Donegan made it 2-0 shortly after with a 25-yard free-kick and that’s the way it stayed at the break.

Donegan turned provider when he passed to Jordan Cox who finished with the outside of his boot from the edge of the area. Soon after Bozarth scored twice with ease, rounding the goalkeeper for his third.

Medford then got a deserved goal after a hardworking performance, striking it with his left foot into the bottom right-hand corner.

Andy Rossiter completed the rout, heading in a cross from Jordan Cox, before Tilehurst claimed a consolation goal.

Elsewhere in the division,
HENLEY TOWN lost 3-2 away at MAIDEN PLACE which saw Thomas Essam sent off for two bookable offences. Daniel York and Alex Walmsley were Henley’s scorers.

In Division 1, two goals from penalties was not enough for EMMER GREEN RESERVES who fell foul of a late winner against MORTIMER.

Green were awarded a penalty which Luke Potter saw the Mortimer keeper save before Archie Denton smashed home the rebound. Mortimer levelled almost instantly with a well struck finish into the bottom corner.

The second half began and Emmer Green were on top and won their second penalty when Charlie Cooper was bought down in the box. This time Potter made no mistake and sent the keeper the wrong way.

Green were then reduced to 10 men when Cooper was shown a second yellow card, which put his side under pressure.

Mortimer equalised but the hosts didn’t fold and Potter was unlucky to see his effort tipped on to the post by Mortimer’s goalkeeper.

The visitors nicked the winner late on when a throw in wasn’t dealt with in the area and the ball found its way over the line.