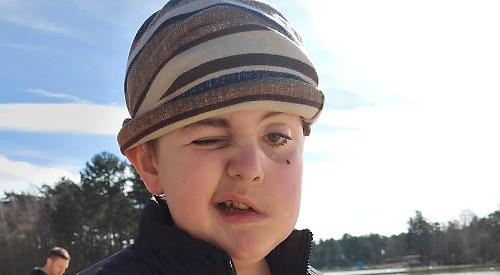 A BOY who had been fighting cancer for the third time has died.

Charlie Ilsley passed away at 9pm on Saturday at the Royal Berkshire Hospital in Reading surrounded by his family. He was 13.

He had been taken to the hospital directly from Heathrow Airport where he was diagnosed with hydrocephalus, a condition in which an accumulation of fluid occurs within the brain.

He had just returned from Mexico with his mother Toni and father Mark where he'd had a follow-up scan following cutting edge immunotherapy treatment.

Charlie, of Buckingham Drive, Emmer Green, was first diagnosed with a brain tumour in 2015 and had undergone various forms of treatment.

His fight against the disease attracted thousands of supporters who donated towards the cost of his treatment and the family’s travel overseas.

In recent months he had travelled to Mexico City several times for treatment and scans, as well as several trips to Turkey in 2018 and 2019.

Prior to the family’s latest trip to Mexico Mrs Ilsley said her son didn’t have any symptoms and had been enjoying playing his PlayStation online with his friends.

In May last year Charlie, who attended Highdown School in Emmer Green, was named child of courage at the second Henley Heroes awards and was given a standing ovation.

Mrs Ilsley wrote a book about their experience called Never Give Up in which she told of her tireless search for treatment for her son.

After his diagnosis in 2015 Charlie underwent a 10-hour operation and had 31 sessions of radiotherapy followed by chemotherapy before being given the all-clear.

Then in spring 2018 two tumours were discovered on his spine. Charlie was given the all-clear for the second time in August last year after undergoing specialist radiation treatment in Ankara which his family had to raise the money to pay for.

But in November last year his family were told the disease had returned after a lumbar puncture showed cancer cells in his spinal fluid.

A scan in March showed the disease in his spine and elsewhere. Charlie had been receiving the drugs etoposide and topotecan but these were stopped as they weren’t working.

Mrs Ilsley searched for new treatments and her son underwent three weeks of a new form of immunotherapy, known as CAR-T cell treatment, in Mexico City in the hope of saving his life.