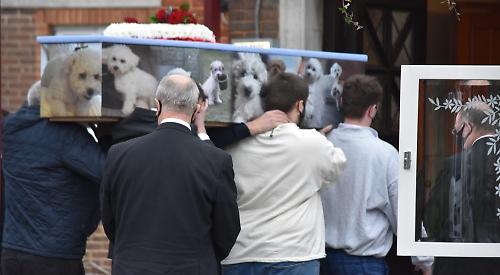 CROWDS gathered in the streets to bid farewell to a teenage boy who died while fighting cancer.

Charlie Ilsley’s coffin was carried in a carriage drawn by four white horses from his home in Buckingham Drive, Emmer Green, to Reading Crematorium two miles away in Caversham for his funeral on Tuesday.

The 13-year-old passed away  at the Royal Berkshire Hospital in Reading on December 12.

A floral tribute on top of the carriage depicted his beloved dogs, Eric and Ernie, wrestling over a hat, while his coffin was decorated with photos of his pets.

Mourners, including his friends from Highdown School, gathered in Buckingham Drive before the procession and many held coloured balloons and signs decorated with a blue heart that simply read “Charlie”.

The cortege made its way south into Caversham before heading along the A4155 Henley Road and then along All Hallows Road to the crematorium.

Here, more of Charlie’s friends and supporters lined the street on the approach as well as inside the grounds. His parents, Toni and Mark, travelled in a white Mercedes and Mrs Ilsley waved to mourners from the window as they arrived.

The coffin, which was adorned with a heart made from white flowers with roses on top and his name, was then taken inside the chapel for the half-hour service.

Only a small number of people were allowed inside because of coronavirus restrictions but supporters waited outside and listened to the ceremony being streamed on their phones.

Mr and Mrs Ilsley entered the church to This Is Me from The Greatest Showman. They were joined by their daughter Jess, 31, son Ollie, 22, and Charlie’s grandparents Ken and Linda Hall.

The celebrant Derek Dunn told the mourners: “We cannot deny or diminish the sadness of this occasion but his life has touched each of you in one way or another and while the world will be a poorer place without him, it will also be richer for him having been in it. There will never be anyone like him but he will always remain in your memories and continue to be a part of the family.”

After taking a moment to compose herself Mrs Ilsley spoke.

She said: “My little Charlie, I love you so much and told you so 100 times a day. I want you to know that you were the best boy in the whole world — the boy I always wanted and so much more.

“I want to thank you for making my life better and showing me how to be strong and brave — and we never gave up, did we?

“I will miss you every day for the rest of my life but want you to know that I love you so much and want you to be free and happy. You will be forever in my heart — love, mummy.”

Mr Dunn said: “That took huge courage — it must run in the family. It’s inevitable, of course, that I’m the only person here who never knew Charlie but I know his story. It has been a real pleasure and privilege to have learned so much about him and I’m very grateful to Toni for all her help.

“I know that losing Charlie has affected his fellow students. He had a huge zest for life and packed more into 13 years than many do in much longer lives. Like many teenagers, he spent a good deal of time on his PlayStation and Xbox and, of course, he loved his dogs, the wonderfully-named Eric and Ernie.

“He enjoyed spending time with his friends and I get the impression he valued them very highly. I do hope that knowing how much you meant to him brings some comfort on your loss. He loved to travel, including on holidays to Florida, where he threw himself into everything, including swimming with dolphins. He was even able to make the most of travelling to hospitals, enjoying bike rides, boat trips and visits to the chocolate factory in Cologne, swimming, horseback riding and enjoying the facilities at the ranch spa in Mexico or exploring the shopping mall in Ankara.

“The huge number of messages which the family has received is a tribute to his defining qualities of strength and spirit. In Toni’s words, ‘He was so funny and cheeky and made us laugh every day. He was kind and thoughtful and the best son anyone could have asked for — and incredibly brave’. I can’t improve on that.” Mr Dunn then read a poem followed by a quote by Russian novelist Aleksandr Solzhenitsyn which said: “Some are bound to die young. By dying young, a person stays young in people’s memory. If he burns brightly before he dies, his brightness shines for all time.”

He added: “I can say with absolute certainty that there’s not enough darkness in the entire world to dim the light that Charlie brought into each of your lives. You’re all better for having known him and he has achieved his small share of immortality by living on in all your memories.”

One of Charlie’s favourite songs, Am I Wrong by Nico and Vinz, was then played.

After the committal, Mr Dunn told the mourners: “Hold on to Charlie in your thoughts, talk about him often, share precious memories and sing his favourite songs. He wouldn’t wish anyone here to be sad for too long but would have wanted you to move forward with your lives in the most positive way possible.

“Keep him in your hearts and memories and he’ll remain a part of this world as long as you live. You can shed tears that he is gone or be happy that he has lived. You can close your eyes and pray he will come back, or you can open them to see all he has left.

“I know that his family want to thank him for teaching them so much about strength, courage, love and so much more — and perhaps, on Charlie’s behalf, I can thank his family. Nobody could have done more or loved more.”

The family left to a cover of Somewhere Over The Rainbow by Israel Kamakawiwo’ole.

Afterwards they were comforted by supporters and then let off blue and white balloons as the crowd applauded. Mrs Ilsley wrote a message on one balloon and kissed it before releasing it.

Charlie, who was first diagnosed with a brain tumour in 2015, had been taken to the Reading hospital from Heathrow Airport after flying in from Mexico following a scan. This followed  immunotherapy treatment earlier this year.

Charlie had undergone various forms of treatment and had twice been given the all-clear. His fight against the disease attracted supporters from around the world who helped raise tens of thousands towards the cost of his treatment.