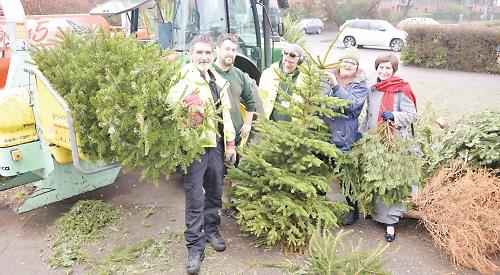 DOZENS of Christmas trees were shredded by Henley Town Council staff on Saturday.

Residents brought their old trees to Mill Meadows, where they were fed into a chipper by members of the council’s parks services team.

Town councillors David Eggleton and Kellie Hinton and Caroline Langler, of Henley in Bloom, lent a hand. Residents paid £2 each to have a tree shredded and in return they could take away a bag of chippings to use in their gardens. The rest was added to the council’s compost heap.

About £130 was raised, which will go to Henley in Bloom.

Cllr Hinton said: “We raised more than double what we made last year. The Mayor donated and he didn’t even bring a tree!” The chipping service began four years ago and was the idea of parks manager Gareth Bartle.

Cllr Hinton said: “Back then the district council didn’t take the trees away and we would see these trees left about.

“Gareth thought it would be a good way of raising funds for Henley in Bloom and tidying up the town.”