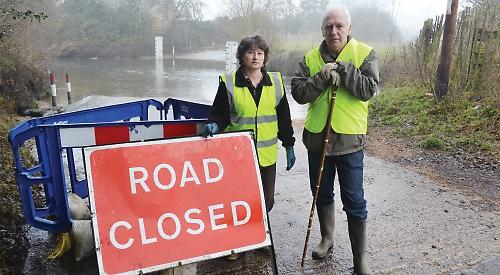 A COUPLE have been appointed Charvil’s first flood wardens.

Graham and Sarah Swatridge, who have lived in the village for a year after moving from Sonning, volunteered for the roles, which are part of Wokingham Borough Council’s new flood plan.

They will be joined by Clayton Tagg, 46, a sales consultant, of East Park Farm Drive, Charvil.

Their responsibilities include watching water levels around the village and helping to support residents at risk from flooding.

Both Charvil and nearby Wargrave are at risk from flooding from the River Loddon while Wargrave is also on the banks of the River Thames. Mrs Swatridge, 56, said: “We wanted to give something back to the community. We often walk around the area, especially the lakes and meadows, and notice what’s going on.

“Our job is to know the area, recognise when the levels are getting high and what are the danger points.

“Any vulnerable people should make contact with the parish council. Those are the people we can help beforehand to reduce the damage of flooding and help to clear up afterwards.”

l Raising roads at risk of flooding, such as the A321 in Wargrave.

l Prohibiting development within 8m of a river.

Mr and Mrs Swatridge, who are both former teachers and spent 23 years in Sonning, have been trained for their roles and provided with hi-viz jackets by the council.

Mr Swatridge, 65, said: “It’s a new scheme but it makes sense to be proactive because we can’t stop floods from happening.”

Earlier this week, Lands End ford in Charvil was closed. It has a history of catching out unwary drivers who get stranded trying to cross it when the water levels are high.