In spite of floods and fire, we love our island home 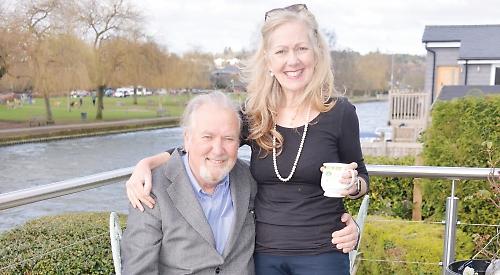 A DECADE ago, David Evans and Ann Tully suffered a devastating fire that gutted their island home in Henley.

The blaze happened just weeks after they had finished refurbishing the house on Rod Eyot following a flood and the repairs took a year to complete.

Five years later, the property was badly damaged again when it flooded and was under almost a foot of water.

Yet the couple insist there’s nowhere else they’d rather live than the single-storey wooden house that they bought 17 years ago when it was just a shell.

At the time they were living in London, where they both worked for an international relocation company, but they wanted to be nearer Mr Evans’s two young sons, Philip and Adam, who are now in their late twenties.

He recalls: “We couldn’t afford a huge amount. We had no plans to live on an island, mainly because it was a pipe dream but then we were looking around here and discovered Finmoor, as it was known in those days. It was affordable but had many drawbacks.

“It was barely habitable. It wasn’t far off a shed but it was a special location and the island has charm. You’re aware of that when you buy and more aware the longer you stay here.”

The building, which then had an outside bathroom, sat low on the Thames island, making it vulnerable to flooding — as the couple soon
discovered.

Ms Tully says: “When we bought it in the August we were told it never flooded. Two months later the house was full of water.”

As the couple were still living and working in London then, they could only spend weekends getting their new purchase back into shape.

Mr Evans, 69, says: “Because it was a ‘shed’ it didn’t take us long to get it back to spec but we thought ‘what have we let ourselves in for?’”

Over the next few years, the couple used the property at weekends, when the boys would spend time on boats and swimming in the river.

When Philip and Adam came to live with them, David and Ann bought Sacred Spirit, a steel motor cruiser which doubled as the boys’ bedrooms. “It was quite an adventure for them,” says Mr Evans.

However, it became clear that the house needed modernising to make it suitable for a family of four to live in. The couple obtained planning permission to refurbish the property but had to keep within the original footprint as much as possible.

The work, which cost tens of thousands of pounds, was completed on Christmas Eve 2006.

Mr Evans recalls: “We were both at work. Ann had gone to London and I was in Manchester when I had a phone call from one of the neighbours who said, ‘David, I don’t know how to tell you this, but your house is on fire’. I came straight down.”

The blaze was so ferocious that the heat could be felt 100ft away across the water in Mill Meadows.

Firefighters were ferried across the river to the island by other residents in their boats as a crowd watched from the bank.

The fire, which had been started by a halogen lamp that had fallen on to the verandah, ripped through the building and destroyed part of the roof.

Mr Evans wasn’t unduly upset. “The family was fine and we didn’t have the dog then so I wasn’t in anguish,” he says. “Ann was upset — she did that for both of us.

“It was more the aftermath as what doesn’t get burnt gets covered in water from the fire brigade dousing everything. We had to cut a hole in the floor to get the water to run out.”

Ms Tully, 57, adds: “The next day it snowed so we had snow in the kitchen — that would have put the fire out. There was also goose and duck poo from the river water, so it smelled beyond belief.

“But every cloud has a silver lining as nobody was hurt or going to hospital. It wasn’t much fun but in perspective there are many more important things going on in the world.”

The couple stayed in Harleyford while their home was rebuilt by the same team who had refurbished it.

Mr Evans says: “When we rang up the builders to tell them the ‘shed’ needed rebuilding they thought we meant the garden shed!

“Having only been in it for 29 days, we decided that when we rebuilt it we would improve it in some way, so we changed a couple of windows. You do something to make it not quite as painful.”

As part of the rebuild, the property was raised slightly to protect it from being flooded.

But in 2014, five years later, that is exactly what happened as floods hit Henley, Shiplake and Wargrave.

Mr Evans says: “The river was the highest it had been since 1947 and we got hammered. At that point the house was 32in lower than now and we had 8in of water inside the house. It was here for months. Every room had the same depth of water.”

The couple bought lots of buckets and when they feared a surge, they would turn these upside down and put their tables, chairs and beds on them.

Ms Tully says: “It was clever because the buckets were only £2 each and the insurance company was very impressed. They want to know you’ve made an effort.

“A couple of the properties on the island have an attic so the owners can put their stuff up there but we can’t do that as we have only one storey.”

After the floods, the house needed to be refurbished again and later that year homeowners on the island banded together to all apply for joint planning permission to raise their properties by 1.4m. Once consent was given, the couple arranged for their house to be lifted using 18 hydraulic pumps.

Ms Tully recalls: “We thought we would spend a large amount of money lifting it and then make it a home. We wouldn’t have done it otherwise. People in the office would say, ‘gosh, you are going to do it again?’. They would look at you and think you’re mad.

“It wasn’t just the money, it was the effort, but there was light at the end of the tunnel.

“It was jolly hard work but it’s special and you have to put it in perspective. The brain has a wonderful ability to forget pain.”

Now, despite the many travails they have endured, the couple are happy with their life on the island and have an addition to the family — Bear, a five-year-old Labrador.

Ms Tully says: “There is a tremendous community on the island and everyone helps everyone else. One of the biggest benefits is that you know everyone and they know you.”

Mr Evans adds: “We all have each other’s phone numbers and know where each other is.

“There’s the odd wet Tuesday morning where you have to start the boat and journey over the river before you can get in the car and you think ‘what am I doing?’ but, generally speaking, it’s good.

“In the summer it’s a different place. There are rowers, swimmers and boats and it’s lovely. It allows you to see other people on the river and walking their dogs on the bank.

“It’s great to see the activity the river brings as people come for fun and pleasure.

“You do need to have a little checklist of things when you leave the house or you are half way across the river when you realise you’ve forgotten something!”

Their home is a constant reminder of the ups and downs of living on the River Thames.

Ms Tully has plastered the inside of every cupboard with pictures of the family, the house in various states of repair and even the builders who rebuilt the property twice.

“You have to be a bit odd to live on an island but I wouldn’t change it,” she says. “In fact it makes you appreciate it even more. Had we not had those acts of nature and bad luck we wouldn’t be sitting in this house now.”