Florist to the stars opens shop in old hall doorway 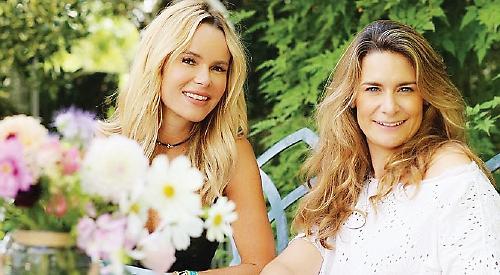 A DESIGNER florist to the stars has launched a retail unit.

Liz Perkins, whose customers include Amanda Holden and Mary Berry, is running her business from the entrance archway at homeware store Life at Nettlebed, which is in a former church hall in the village High Street.

It comes less than a year after the former teacher started her floral design company, called “elizabeth.”

Mrs Perkins, 42, a mother-of-three, who lives in Bix, had been focused on supplying flowers for weddings and other events as well as window dressings.

But her new location means she can now sell and make up bouquets on site.

She said: “People will be able to come in and see the goods and I can make them up or they can leave a message for me to make something up.

“There will be staff in the shop so people can buy made-up bouquets when I’m not there.

“They will be able to pick up their orders or people might be going past the archway and want to come in.”

The building is shared with the Field Kitchen café and deli, where she used to display her work.

Mrs Perkins said: “My dream is for people to stop by when they are having lunch at the Field Kitchen. I like the idea of coffee, interiors and flowers all merging into one.”

To mark her arrival, she decorated the archway with seasonal flowers including eucalyptus and vintage pink roses.

Mrs Perkins said: “The building has a beautiful doorway, perfect for displaying flowers. I decorated the porch to make it look pretty and attractive. Life have been really supportive of me starting up my business.”

Karen D’Arcy, who founded Life at Nettlebed with Sue Beales more than 10 years ago, said they previously sold flowers themselves.

“We wanted someone with a more professional approach who would be able to offer them from our shop,” she said.

“People are always asking about bouquets and flowers and ask us for recommendations, so this is another thing we can offer people.

“Liz is local and we knew her as a customer before she started working as a florist.”

Mrs Perkins trained as an English teacher after studying at Exeter University and taught for 12 years at schools in London and Oxfordshire.

It was as she recovered from a skiing accident in 2015 in which she broke her knee that she decided to start a new career and went on a course at the Judith Blacklock School of Floristry in Knightsbridge.

“After my accident I had to learn to walk again,” said Mrs Perkins. “It was quite a traumatic year but sometimes when you’re challenged it makes you think about what you want to do with the rest of your life.

“It took about a year to be fit and healthy again, so I was able to walk and drive and do all the normal things.

“It was a really good experience in one respect because I was able to reassess what I wanted to do.

In the run-up to Christmas she ran wreath-making workshops and sold one to Mary Berry at Moulsford School’s Christmas fair, where she had a stand and the Bake Off star was doing a book signing. “I was selling Christmas arrangements and one of the wreaths took her fancy,” said Mrs Perkins.

She has also worked with Henley events and catering company 81 Events to supply flowers and will be providing displays for this year’s Henley Festival.

Among her other customers are actor Simon Williams, who lives in Nettlebed, and actress and X-Factor judge Amanda Holden.

She is a friend of Holden’s personal assistant, who put her name forward to supply floral decorations for the star’s summer garden party.

Mrs Perkins said: “I decorated the tables, trees and her kitchen. Some of the flowers were supplied by Tamsin Borlase, from Bosley Patch in Henley. It was a country garden with jam jars and a variety of more luxurious flowers for inside.”

She said she was surprised at how quickly her business has taken off.

“I feel passionate about it and people seem to be picking up on that,” said Mrs Perkins. “I love it and that’s contagious.

“Most of my business comes from word-of-mouth. It allows my business to grow with my family commitments. It allows me to pick and choose and stick to the bespoke part of it.

“My lowest expectation when I started was to be able to make a bouquet of flowers but I’m doing restaurants and shop windows. I want my flowers to make people feel better and for them to love them.

“I find it lovely to be able to give people flowers and make them happy. I don’t know anybody who doesn’t like receiving flowers.”