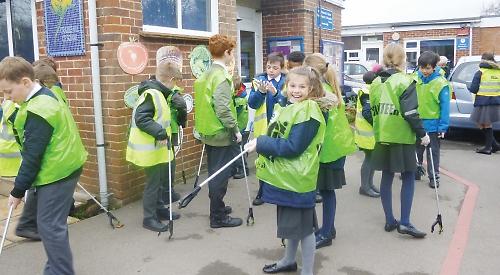 DOZENS of residents helped clean the streets of Charvil, Wargrave and Crazies Hill.

Litter-picks were held in the three villages as part of an annual spring clean initiative across Wokingham borough.

In Charvil, more than 30 locals took part and were supplied with hi-viz jackets and litter-grabbers.

Parish clerk Miranda Parker said: “It went very well. About 50 bags of rubbish were collected. We are pleased with the enthusiasm shown by people who turn out year after year.”

In Wargrave, about 30 residents spent a morning collecting rubbish, starting and ending at Mill Green in Station Road. Among the items collected was part of a large business sign.

Parish councillors Marion Pope, Angela Cordell and Terry Cattermole were among those who took part.

Councillor Pope said: “We had a really good turnout and picked up a lot of rubbish. We could have made a whole car out of all the bits of vehicles.”

Cllr Cordell said two large containers found in Scarletts Lane were made of asbestos. These were reported to the borough council.

Fellow councillors Richard Bush and Philip Davies took part in the litter pick in Crazies Hill along with six other residents.

Organiser Rita McLaughlin Pugh said: “There was nothing particularly unusual — one car tyre and one numberplate.”

Pupils from years five and six at Crazies Hill Primary School collected litter in the school grounds and the road outside.