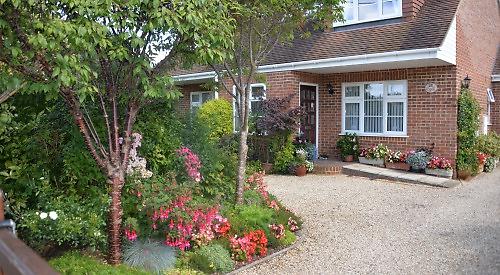 A COUPLE with more than 81 clematis plants have won this year’s Sonning Common front garden competition.

David and Joyce Brewer were praised by the judges for the quality and variety of the clematis at their home in Woodlands Road, where they have lived for nine years.

The couple, who have been married for 58 years, built the house in the garden of their former bungalow in Newfield Road, using their old vegetable patch and chicken run.

Their new garden includes flowers, shrubs, two sets of seating and evergreen plants to keep it looking good in the winter months.

Mrs Brewer, 78, said: “We both love gardening which helps with looking after it. I tend to put all the flowers out, then David plants them — he does all the hard work!”

Mr Brewer, 80, said: “We keep a lot of the plants in pots so we can move things around. We’ve always had fun with our gardens and the different colours.

“This year we’ve had 81 clematis flower, which is quite surprising considering the weather. The garden looks different every day.”

Their garden was one of 18 nominated by other villagers for the annual competition, which is organised by the Chiltern Edge Horticultural Society.

The judges, led by by Maureen Stevens, of Inglewood Close, visited them all at the end of July when they looked their best.

Mrs Stevens said: “David really is the clematis king. He and Joyce came out on top across our points system and there was such great variety in their garden, which just looks lovely.”

Mr Brewer, who used to work for the Post Office in Reading helping to run counters, said the couple’s old garden was much larger and they would hold open afternoons to raise money for charity.

“The old garden had a lot more clematis,” he said. “We moved out of our old bungalow to downsize and built our own house in part of the garden. The new front lawn takes me about 10 minutes to mow.

“The garden is something for all-year round. We try not to let the plants grow too high as it blocks the sun out. We tend to cut most of it back in February then let it grow again.”

The couple, who have three grown- up daughters, use their back garden to grow their own produce including raspberries, potatoes, sweetcorn and runner beans.

Mrs Brewer, a retired hairdresser, said: “People joked we could move using wheelbarrows and in the end we did. We moved a lot of our plants over to the new garden.

“Gardening is our hobby. We don’t like sports, although we do listen to Reading Football Club’s matches on the radio. Gardening and going on holiday is our life.

“We are just very, very keen. You can learn a lot if you’re interested and we are members of the Clematis Society.”

The couple thanked the judges for running the competition.

Mr Brewer, who was treasurer of the horticultural society for 33 years, said: “There are a lot of lovely gardens in Sonning Common. There is real colour and variety when you walk around the village.”

Mrs Stevens said: “The garden was a blaze of colour. Vera does most of it. It’s mostly made up of annuals and shrubs.”

l The society’s annual summer show will be held at the village hall in Wood Lane on Saturday, September 2 from 2pm to 4pm.