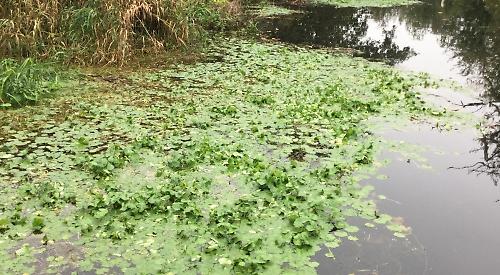 A HIGHLY invasive and fast-growing river weed is threatening to choke the River Thames in the Henley area, an ecologist has warned.

Floating pennywort, which can grow up to 20cm in a day, has been spotted on the river at Sonning and in Hennerton backwater, near Wargrave, which flows off the Thames.

The plant, which comes from the Americas, forms thick “carpets” which can completely cover waterways and kill other flora and fauna by depriving them of oxygen.

Often these can only be removed using cranes as they are too heavy to pull out by hand. They are then incinerated.

Professor Alastair Driver, a former Environment Agency conservation manager who lives in Sonning, first spotted small clusters of the plant at Blake’s Weir in Reading over the summer and reported his concerns to the agency.

He says it took no further action and the pennyworth has spread further downstream towards the village. The agency says that it has conducted several sweeps but more will be needed to get the plant under control.

Tom Berman, who lives in Henley Road, Wargrave, saw a patch of floating pennywort in the backwater on Monday.

Over the space of just three days, it spread from about one-quarter of the width of the channel to about a third. He has also reported it but the agency said it couldn’t help in that instance as it is only responsible for the main river.

It said Mr Berman and his neighbours were responsible for containing and removing the infestation.

Prof Driver, who oversaw a successful eradication of the plant at Reading about a decade ago, says the sightings should be treated with the same priority as flooding as it will be much more expensive to tackle should the weed continue spreading.

He says it could become too prevalent to stamp out and would cost large sums just to keep at bay.

He said: “If the agency doesn’t eradicate this plant in the middle Thames right now, this autumn, while it is just about do-able, then it will be too late. Once the winter comes, fragments of the pennywort will have spread throughout the river downstream and it could cost tens of thousands of pounds in public money per year to keep on top of it in the Thames alone — possibly for ever.”

Mr Berman said: “We’re not too worried about things like duckweed as that will be killed by the first frosts of winter but this is much more alarming.

“There are considerable clumps and they’re growing enormously as the water flows slowly here.

“They say they only look after the main channel but this weed knows no boundaries and it’s a real worry for us.

“We think they’re on legally shaky ground as we’re only responsible for the land beneath the water and we need specialist advice at the very least.”

Floating pennywort can be identified by its shiny, kidney-shaped leaves, which are usually broader than longer and up to 7cm at their widest. It has fine roots below the water and thick, fleshy stems protruding above it and occasionally produces small white flowers.

It was accidentally introduced in the early Nineties by people discarding garden plants and it is a criminal offence to grow it in the wild.

The Environment Agency said it was aware of the infestation and appreciated its seriousness.

It has swept the river at Sonning with cranes several times and will continue to do so while checking for any fragments that could start growing again.

It will reassess the situation over the spring and sweep again or spray herbicide if the problem has persisted.

It said the weed would most likely have come from a lake at the Green Park technology estate in south Reading and spread quickly because of low river flows and warm weather over the summer.