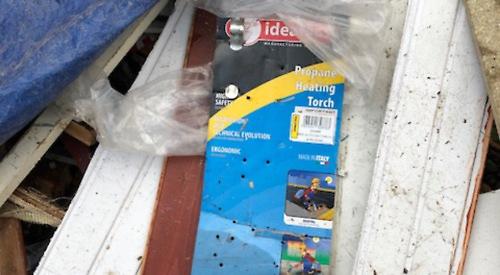 THIS pile of rubbish has been dumped in Harpsden Woods.

Duncan Whale found the trade waste near the edge of the woods off Woodlands Road.

It included old blinds, bits of wood and food packaging covered by a tarpaulin sheet.

Mr Whale, 36, of Farm Road, Henley, came across the rubbish while out walking his cockapoo Tilly on Saturday.

He said: “It’s disrespectful to the people who use the woods and it’s dangerous because of what’s in there — there is fibreglass, nails and sharp bits of wood.

“They have gone to the trouble to cover it with tarpaulin but it should not be there at all.

“I’m convinced someone will know who did this is because you can see what they left. I want to discourage others from doing the same.”

Mr Whale, who works in financial services in London, said all tradesmen should work within the law and pay to dispose of their rubbish legally.

The rubbish was removed by a contractor for South Oxfordshire District Council, which is responsible for waste disposal.

A spokesman said: “This fly-tip was reported to us on Sunday and investigated the following day. Anyone who has information about this waste is asked to contact our environmental protection team.”

Kester George, chairman of Harpsden Parish Council, said fly-tipping was a persistent problem in the parish.

He said: “The district council is good at coming to clean up the rubbish. You simply have to keep at them.

“There was an instance a few weeks ago on Sheephouse Lane from Harpsden church down to the main road. It’s all to easy for the culprits.”

He said perhaps councils could consider scrapping the charges for accepting trade waste.

“I think that may help deter them but the perennial laziness of the rogues who do it is at the route of the problem.”