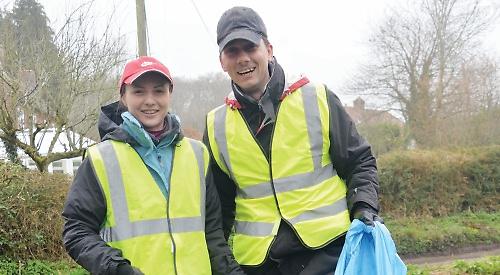 MORE than 50 people took part in spring cleans in Bix and the Assendons on Sunday.

There were 22 volunteers in Bix, 15 in Lower Assendon and 18 in Middle Assendon.

Parish clerk Jane Pryce said: “We were lucky as the rain had pretty much stopped by the time we did it. We had a very good turnout and in Bix we managed to collect 10 bags of rubbish. The worst areas were the single carriageway between Bix and Nettlebed and down by Broadplat, where there were car parts and wing mirrors. There were also coffee cups and crisp packets.”

Mr Digby, a parish councillor, said: “It’s amazing what you find. We found a paint can and a few wheel hubs.”

The litter-picks had been scheduled for last month but were postponed due to snow.