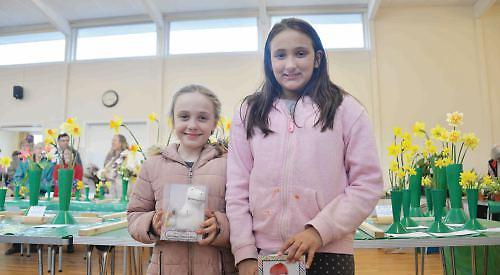 A COUPLE from Sonning Common have won the village front garden competition for the second time — and they didn’t even enter themselves.

They previoulsly won the competition in 2011 when they lived in Blackmore Lane.

The couple, who both grew up in the village, moved house in 2013 and renovated the front garden when they extended the bungalow two years later.

They created flower beds around the edge of the garden and a separate area for growing vegetables and plants.

Mr Silver, 72, a retired builder, also built a new boundary wall and entrance together with some small flowerbeds.

He said: “We love doing our garden, especially for the spring.

“We don’t do it for the competition and we didn’t even know we had been entered until someone put a letter through the door.”

Mrs Silver, 55, who works at Tesco in Henley, added: “We were surprised to win because it has been difficult with the snow we’ve had. It has been hard to get out and play around with it. We did have a chance over the Easter weekend to have a bit of a tidy-up.”

The garden includes daffodils and aubrieta.

In the summer the trellis which separates the two sections has clematis growing up it and the couple grow produce including onions, tomatoes, leeks, runner beans and carrots.

They also bring on plants in their greenhouse to give to friends.

Mr Silver said: “I feel like we’ve made the garden look better. I put the new wall up and the plants we’ve put in have given it more character. It has made it more attractive.”

The judges, who were led by by Maureen Stevens, of Inglewood Close, visited all the gardens entered for the competition last month. Second place went to the communal area at Chestnut Gardens, off Peppard Road, and third to Mike and Betty Farina, of Inglewood Close.

The Silvers were presented with the cup at the society’s show at the village hall on Saturday. More than 100 people attended the event, which included entries in classes for flowers, domestic and handicraft.

Society chairman Nigel Crush said: “We did well to get as many exhibits as we did because the weather has been awful and gardens have not come on much.

“I want to thank everyone who came to what was a nice, busy show.

“Since we moved the event to the village hall a few years ago we have had more footfall. It’s a good social event for the village.”

Mr Crush thanked the volunteers for their help in running the event. Among the other winners was Lynda Crocker, of Crowsley Way, who was awarded the Grove Cup for most points in the daffodil, narcissus and tulip classes.

Bernard Winnington, of Grove Road, won the Avern Trophy for the best exhibit in the daffodil and narcissus classes.

Soicety deputy chairman John Windass, from Peppard Common, was presented with the Village Cup for the best exhibit in the flower classes.

The show also included a plant sale run by Barbara Pilbrow and Janet Evans, a raffle and the sale of tea, coffee and cakes.

The society’s autumn show will be held at the village hall on Saturday, September 1.