Volunteers collect all sorts of rubbish around village 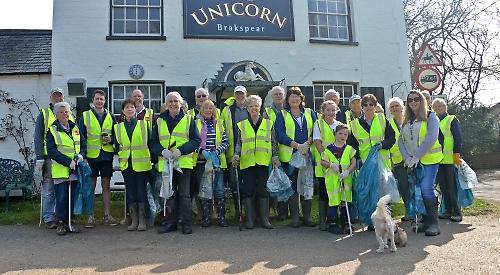 They tidied up the verges, commons and woodlands and found a range of rubbish, including the front of a car, road signs and car tyres as well as drinks cans and takeaway coffee cups thrown out of cars.

The volunteers met at the Unicorn in Colmore Lane on Saturday morning when they were given litter-picks, bin bags and
hi-vis jackets.

Jeni Wood, a parish councillor who organised the event, said people generally worked in pairs in order to cover as much of the parish as possible.

She said: “Some of the things people found were amazing. On the road between Bolts Cross and the Top Common there was the front of a car, including the number plate. Near the Top Common there was a number of tyres. We were so pleased with the sunny weather, which was good for numbers. There were also different people to those who came last year, so that was pleasing too.

“A few people came from Kidmore End and there were a couple of people from Kingwood.” The volunteers collected about a dozen bags of litter. Afterwards they were served refreshments.

Councillor Wood thanked everyone for helping and praised the work of village cleaner Mark Weston.

She said: “There were fewer bags collected than last year but I think that is down to the work of our cleaner.

“All in all I’m very, very grateful for everyone who turned out to support the spring clean.”

Councillor Wood added that the volunteers had tidied Shiplake Bottom, part of which is in Sonning Common parish.

She also spoke to Emma Lawrence, who is organising the village clean in Sonning Common next Sunday (April 29), when villagers will tackle Blounts Court Road, which is also in both parishes.

Peppard Building Supplies has given £50 towards the Sonning Common clean-up which will go towards children’s gloves.

Volunteers will meet at the village hall in Wood Lane at 10am.