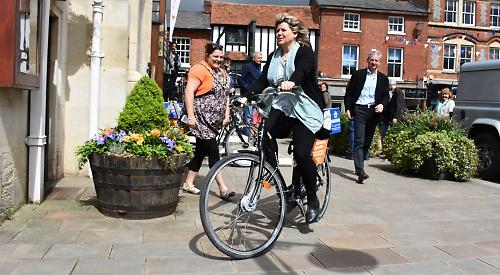 A CYCLE hire scheme for Henley has been launched.

Bainton Bikes will be available to hire across the town from today (Wednesday) and will give residents and visitors a chance to explore the area without using a car.

Users will have to download an smartphone app to book, unlock and pay for the bikes. They can be hired for two hours, a day or a week.

The town will get eight bikes initially but this could be increased if there is enough demand.

The bikes will be kept at the River & Rowing Museum, the Anchor pub in Friday Street and Market Place. Each machine is fitted with lights, a bell, a phone holder and puncture-resistant tyres.

Other locations, including Swiss Farm and the train station, will also be “hubs” for collection and dropping off once permission has been granted by the landowners.

The company is also trying to get permission for hubs in South Oxfordshire District Council’s car parks in Kings Road and Greys Road.

Howard Papworth, from Watlington, started the scheme in Oxford two years ago and it has now been rolled out to 10 other locations.

He said: “We chose Henley as its a reasonable distance from Oxford and a good opportunity for us.

“There are lots of good cycle routes in the Chilterns and Henley is a good place to set off from – you can get to Aston, the Hambleden Valley and along the Fair Mile to Stonor.

“The next stage for us is producing maps for people who do not know the area so they are able to go off within a five mile area around the town.”

Henley Mayor Kellie Hinton said: “I am sure it’s going to be successful. This is something that encourages people to get out of their cars and it will directly help with air pollution.

“It’s a convenient way of getting around town and it’s healthy.”