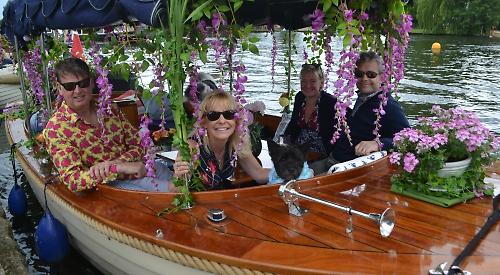 THE fifth annual Chelsea Fringe Henley festival will start with a floral flotilla this Sunday.

Ten boats are signed up so far for the event and they will gather at the Mill Meadows moorings at 2pm to kick off the week-long alternative gardening festival.

There will also be a heritage day at the Berkshire College of Agriculture, a “peaceful garden” event, an afternoon of poetry readings, and a picnic in Henley’s new community orchard will close the festival.

Victoria Newton, who co-ordinates the event, said: “This year Chelsea Fringe has been condensed into one week of events which coincides with the RHS Chelsea Flower Show. We have got all this enthusiasm and excitement at the time of the Chelsea Flower Show and this is your chance to get involved at a local level.

“There’s a huge range of horticultural activities that goes on in the local area, whether that’s our own award-winning garden designers, flower growers, market gardeners or even just people entering the Henley in Bloom front garden competition. There’s a huge range of expertise and enthusiasm in the area and this is just giving people the opportunity to showcase that.”

Once again boats will be decorated with a horticultural theme and this year will again feature an aquatic car as well as Mrs Newton’s own 30ft boat. Hobbs of Henley has donated a boat to bring the Henley Brownies.

The Berkshire College of Agriculture in Burchetts Green will also hold its heritage day on Sunday from noon until 4pm. The days’ activities have been based on Diana — Goddess of Hunting, in order to raise money to restore the rare statue of Diana of Versailles, erected by Joseph Bancks in the 1600s.

Mrs Newton said: “It’s an opportunity to go in because they don’t have many days when you can go and view this fantastic grade I listed mansion house and their parkland which is grade II listed as well. “You’ll be able to see the statue, have a tour around their gardens and there will be activities for children.”

Visitors will also be able to view animal-themed floral creations assembled by the college’s floristry students, enjoy archery activities on the back lawn and there will be “Hunt the Hen” for children — a trail leading around the gardens whilst keeping a lookout for strategically placed hens.

The Henley Quakers will once again host their “peaceful garden” event at the Friends Meeting House in Northfield End from 2pm until 5pm on the Sunday.

Southbrook Cottage in Hambleden will host a poetry event called “Nature in the raw” on Tuesday from 2.30pm until 3.30pm with readings about the great outdoors.

The fringe will finish with “Below the Blossom”, a picnic in the newly planted orchard off Paradise Road in Henley, from 11.30am until 2.30pm next Saturday.

Mrs Newton said: “This is a really exciting event because it’s the first real community garden event we have had as part of the fringe in Henley.

“The orchard was planted in January by residents, volunteers and community groups. It’s an opportunity to think about how we’re going to use the space and manage it going forward.”

Visitors will be able to meet those who helped create the orchard.

She said: “Gareth has been instrumental since the Chelsea Fringe in Henley started in making sure all of these events happened, in particular the floral flotilla, and also enabling the community orchard project to get off the ground. He really will be missed.

“Chelsea Fringe wouldn’t happen without the support of businesses, residents, community groups, the town council and Henley in Bloom and, as an organiser, I’m really grateful for the support.”

If you would like to register your boat for the flotilla email
victoria.newton@btinternet.com