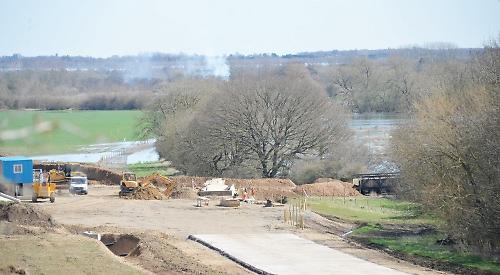 A NEW entrance to the expanded Sonning Works quarry will open soon.

Tarmac is creating the new access on to the A4155 between Henley and Caversham, close to Spring Lane, which will be used to import infill material for restoration of the area.

The firm began extraction on the 81.5-acre site in October following six months of preliminary work.

The company held an information day for residents last year and a liaison group has been set up for communication between the site team and the community.

The group includes representatives of Sonning and Eye and Dunsden parish councils and Oxfordshire County Council, which is responsible for mineral extraction. After the heavy rain in March the site became flooded but site manager Kevin Brown said there was no cause for concern.

He said: “I know some residents have been concerned about potential flood risk.

“There is a high water table in the area and we experienced heavy rainfall in March which led to localised flooding. This was naturally occurring and not as a result of our operations.

“We have an extensive groundwater monitoring system in place, the results of which we report to the local council and the Environment Agency for verification. Once reviewed, these reports are put in the public domain for any interested parties to view.”

Plans to create the quarry were approved by the county council in 2014.

Shiplake, Sonning and Eye and Dunsden parish councils objected to the scheme, as did the Henley Society, the Sonning and Sonning Eye Society, the Chilterns Conservation Board, the Campaign for the Protection of Rural England and a number of residents.

Tarmac, which also owns the gravel works on the B478 Playhatch Road, is going to extract 1.86 million tonnes of sand and gravel over the next 12 years. It will then spend another two years restoring the site.

Heavy goods vehicles will be accessing the works between 7am to 6pm Mondays to Fridays and until 1pm on Saturdays. Extraction at the new site will double the number of lorries every day from about 40 to 80. There will be about 15 extra vehicles collecting sand and gravel and 25 more dropping off the waste.

Mr Brown said: “Quarrying for sand and gravel has taken place in the area since the Fifties, serving local demand for high-quality construction materials. Sonning quarry was granted planning permission in 2014 and operations started last year. It will take 12 years to complete with the land being progressively restored to nature conservation and agriculture.

“If residents have any questions or concerns I am always on hand to help and will continue to keep residents updated regularly via our liaison group.”

David Bartholomew, who represents the area on the county council and chairs the liaison group, said he has receievd no adverse feedback since the work started.

He said the backfilling work would not start until next year at the earliest and then only once a extraction site was completed.

Councillor Bartholomew added: “The actual junction is still waiting on final permissions and traffic regulations. It should all be connected up by late summer or early autumn.

“The question I have on the backfilling is where the material is going to be coming from — through Cane End or through Henley. Tarmac say they won’t know until nearer the time.”

David Woodward, chairman of Eye and Dunsden Parish Council, said: “We fought long and hard against it because of our concerns about the flooding. The original proposal for the access was into Sonning Eye, so we are glad it is elsewhere.

“It has a big visual impact because of the need for there to be safe turning there. Tarmac is a responsible company and it is going all right so far.  Backfilling, which has not started yet, is our concern due to the extra traffic.”

Nick Marks, who leads the Sonning Eye Action Group, which opposed the quarry, said: “The question is whether the final outcome by backfilling with clay will change the characteristics of the flood plain.

“Nobody knows the answer because there is no evidence one way or the other. Our view was it was going to have an impact and if you don’t know if what it is going to be then do not do it.”