Call to ban or restrict use of barbecues in meadows 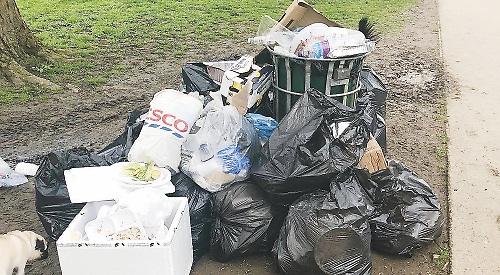 BARBECUES should be banned from Henley’s riverside beauty spots or only allowed in designatted areas, say residents.

This was among the findings of an online survey about ways to keep Mill and Marsh Meadows tidy.

Janet Wood, of Boston Road, and Karen Morris, of Park Road, organised the survey following repeated complaints about people leaving rubbish and using the area as a toilet and damage caused by barbecues.

The issue came to a head in April when Marsh Meadows was left strewn with rubbish after a Sikh festival celebration attended by hundreds of people and residents complained about the area being used as a toilet.

Henley Town Council is planning to install extra bins and improve signage in the area.

Plaques asking people to dispose of their rubbish properly will be placed on all 22 bins on the towpath and six barbecue stumps.

The council is also considering employing a security company or a park ranger on high-volume weekends to manage crowds and antisocial behaviour and investigating the possibility of installing more CCTV.

A total of 339 people responded to the survey in less than four days.

Forty-eight per cent of respondents said barbecues should only be allowed in certain areas, while 38 per cent favoured banning them altogether.

Thirty-three per cent wanted a charge per barbecue with the money going to the management of the parks. At the moment barbecues are only allowed in Marsh Meadows.

To help tackle rubbish, almost 70 per cent of respondents favoured large commercial bins in car parks while more than 42 per cent agreed with the idea of emptying the bins several times a day.

Fifty-five per cent of people strongly agreed that there should be more CCTV in the area.

More than 50 per cent agreed that charging for the Mill Lane car park would be reasonable.

Some respondents commented that charging for a stay longer than two hours would be more accommodating to those who wanted a quick stroll or swim.

Some expressed concern at the lack of enforcement when drivers parked on double yellow lines along Mill Lane, blocking emergency access.

Half of respondents said the toilets at Mill Meadows were “adequate” but 30 per cent said they were “poor”. Many commented that they were not open often enough or were not cleaned properly.

Fifty-six per cent of respondents said that fines should be issued by park rangers to dog walkers without poo bags and 41 per cent said that dogs should be kept on leads in Mill Meadows.

Some said that enforcing fines would be difficult and one respondent suggested that instead of fining dog walkers parks staff could sell poo bags.

Mrs Wood, 43, who runs her own customer feedback business, said the problem of mess in the meadows had been getting worse and something needed to be done.

She said: “This has been going on for well over three years now. Karen suggested doing a survey and seeing what people think.

“What I think the survey shows is that when one person thinks something’s a good idea it’s important that we get as much feedback and as many different considerations as possible.

“It’s only when you can collect all that information you get a much better, realistic way of solving a problem.

“We were surprised that people didn’t want to ban barbecues but there were some really good ideas like people putting a deposit down for hiring a barbecue space and then getting their money back once the park ranger has made sure everything’s cleared up.

“What was lovely was that people came up with some really innovative ideas. One person said wouldn’t it be lovely if schoolchildren could make some posters to say ‘please don’t litter’.

“It’s little things that can make a huge difference and asking people for their feedback in this way you get all these fresh suggestions and ideas. I hope that in the short term for the rest of this season there are more collections — and more later so there’s no rubbish left overnight and strewn around and bigger signs educating people about the rules of the park.

“Then long-term consideration can be given about how to manage barbecues effectively.”

“It’s never easy to balance keeping these available as open spaces, while making sure they are used properly and not overcrowded.

“The council has put in place a number of measures to achieve the right balance and we’re very keen to listen to residents and visitors for ideas to help us do this.

“Karen and Janet’s survey has been really useful in helping us to do this. I’d like to thank them very much for their efforts.

“The results were very interesting with a much higher percentage of people wanting the barbecues to remain than I had expected.

“A high percentage of people wanted larger signage at the Mill Lane car park entrance which I absolutely agree with.

“It was interesting to see 50 per cent of respondents agreed to charge for parking. While this may have some merit, it would not be simple to manage and other users may not agree with it.

“We clearly all want the same thing and most of the other results we are dealing with now.”