Festival celebrates nature and how it helps our health 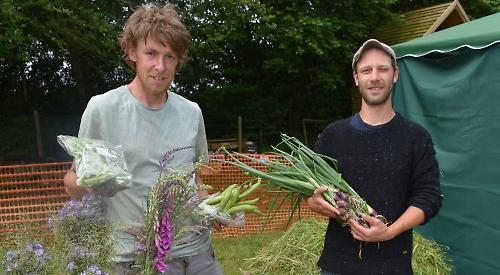 A FESTIVAL celebrating wildlife and wellbeing took place in Park Corner, near Nettlebed.

Chris Gibbs, from Huntercombe, organised the Field Festival, which was held at the True Nature Project, off the B481.

Among the attractions were meditation sessions with former monk Edward FitzGibbon and Brahma Kumaris tutors Nina Thomas and Al Hodgson.

Andrew Brackenborough and Finn Hemingway, from Woodcote, were selling wildflowers and produce from their market garden in Crays Pond. There were also talks on growing produce and woodcraft.

Mrs Gibbs, a garden designer, set up the project and runs weekly meditation sessions on the site to help people with their spiritual wellbeing.

There are also regular nature walks and talks and visitors can practise nature-based skills, traditional crafts and horticulture. Since the project opened last year, the visitors have created a flowerbed out of a muck heap and built a composting toilet.

Mrs Gibbs, who leases the land, said: “I hope to help people who are dealing with the stress of life and want to take a bit of a different perspective.

“It’s a place for adults and kids to learn about being self-sufficient both physically and psychologically.

“People get a chance to learn to be stress free and take control of their emotions. It’s about breaking beyond the panic and anxiety and how to reduce it significantly.”

Mrs Gibbs said: “It was not as busy as it could have been but you never know when you organise these things. Those who did come along were interested in what we are doing and want to come to some of our sessions. The event helped us get the word out.”

For more information about the True Nature Project, call Mrs Gibbs on 07929 633384 or email her on
gibbsgardens@btinternet.com