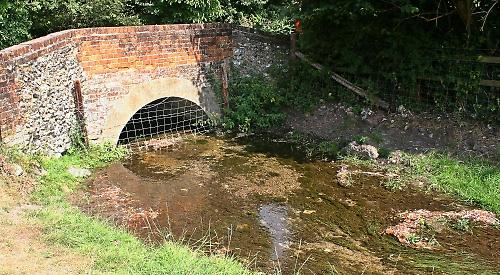 A LIFELONG Hambleden resident has criticised plans to fence off the village brook along both sides of its entire length.

Michael Elliott says the scheme, which landowners are carrying out at their own expense to comply with laws that protect chalk streams, will spoil views along the Hambleden valley.

The 77-year-old claims the measures are unnecessary because the brook, which runs for about 7km from the top of Watery Lane at Turville to the River Thames at Mill End via Skirmett and Hambleden, runs dry more often than not and is rarely in full flow.

Dr Elliott, who served for many years as the village’s GP, says the metal wire fencing is unsightly and will eventually be entwined with vegetation, which will obscure the brook from view.

Two weeks ago a tenant on land owned by Peter Jensen, of Hambleden Manor, installed a fence along a 1.2km stretch of the brook which adjoins his field immediately south of the village’s flint bridge, which a public footpath runs through.

Others will soon have to follow suit in order to avoid enforcement action from the Environment Agency, which is acting for the Department for Environment, Food and Rural Affairs. It is understood that it has contacted several landowners over the past few months and is surveying the area.

The proposal was first announced at a public meeting at St Mary’s church in Hambleden in 2015, which 62 people attended to raise concerns about the effect on views and the cost to landowners.

The agency says Hamble Brook is a “rough diamond” but “chronically sick” as the banks have been trampled by years of cattle grazing, which leaks both soil and manure into waters that should run clear.

This also covers the gravel bed in a layer of dirt, making it harder for fish to breed, while the chemicals in manure make it easier for plants and algae to establish themselves.

The agency says the brook must be restored to “good” ecological status by 2027 to comply with British and European law and landowners could be fined or lose their basic farm payments for failing to comply.

It says it will help farmers find sources of funding and fencing will soon blend into its surroundings as it becomes weathered.

But Dr Elliott, who also owns land adjoining the brook where he grazes horses, says fish could never establish a habitat in the watercourse because they would die once it dried out again.

He said: “This seems to be an extreme case of putting the cart before the horse — the problem being that the stream is hardly ever running, almost never in its full length and only very rarely, as at present, along a short section and even then only for a short period of time. If that problem could be solved by DEFRA, everyone would be delighted.

“However, unless and until they can achieve that, it seems a pointless waste of money to erect fences along the banks of the stream which is soon to run dry.

“In addition, the proposed fencing would spoil certain views which are among the best to be seen anywhere in the country. In large open fields where the stream has no fence or hedge on either side, it can be seen from a long distance when it is running and then makes a natural and valuable contribution to the view.

“With the first trickle of flow in the stream, DEFRA are back and I wonder if they were waiting for this to happen. They could hardly have defended their case for fencing off a dry stream bed.” An Environment Agency spokesman added the fencing was necessary to comply with new rules to prevent water pollution that were introduced in April.

He said the agency had liaised with various groups including the Chilterns Conservation Board and the National Trust, which has held a protective covenant over the village and its surroundings since 1944.

He said: “We’re following a soft, ‘advice-led’ approach in ensuring compliance as we are still in the early days although enforcement action will remain a possibility. It is ultimately our job to protect and improve the environment and this legislation will do that, which is essentially good for everybody, from the farmers to their livestock and local wildlife.”

The brook was completely empty throughout 2011 and 2012 but sprang back into life following heavy rain in 2013. It has been intermittently dry ever since and was in drought for most of 2017 but is currently in flow.

Mr Jensen did not wish to comment when contacted by the Henley Standard.