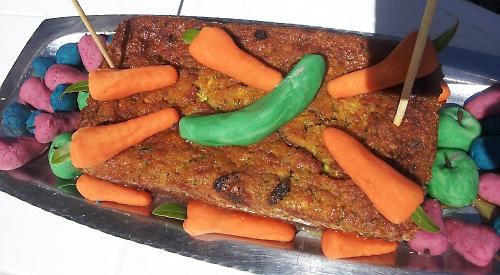 A WOMAN has been recognised for her outstanding contribution to Henley Allotments Association.

Marisa Francini, of St Mark’s Road, Henley, served for 10 years as secretary and vice-secretary of the group until last summer.

During this time she formalised payment processes and worked with the town council on tenancy agreements.

Mrs Francini was presented with the Outstanding Achievement Trophy on Sunday in front of about 30 people at Watermans allotments, off Reading Road, where she used to have a plot.

The trophy is awarded annually to someone there or at the Greencroft allotments, off Matson Drive, who goes above and beyond to help others.

After the presentation guests enjoyed cakes and drinks.

Mrs Francini stood down as she was suffering with chronic fatigue syndrome but the association committee wanted to recognise her contribution.

She said: “I was surprised they chose to give it to me. Last year I was just exhausted all the time, so I left with immediate effect and gave up my allotment. They wanted to recognise my contribution in the last 10 years but I asked them not to do it until I was better.

“I absolutely loved it but had to step down because of my health.

“I asked if they could present it at Watermans as that is where I had my plot and know a lot of people.”

Mrs Francini joined the committee as soon as she took over a plot in 2007 as they were looking for volunteers. She spent most of the time working with former secretary Peter Herbert, who stepped down in 2015. She said: “When I joined the committee they were struggling a bit as they didn’t have email addresses and the site managers were still collecting rent with people paying cash and making a note of it.

“I contacted the town hall and asked if we should work together to put some processes together and make it more formal.

“The allotments have a really wide group of people from all kinds of backgrounds where gardening is their passion.

Doug Richards, site manager for Watermans, said Mrs Francini would be missed. “She has been with us for a very long time and has always gone over and above what is necessary,” he said.

“She has not only done work with us but also for Henley in Bloom and the Gardening Buddies, all of the other gardening voluntary things around the town.

“We are going to miss her greatly because she is great person who has a great rapport with the town hall and others she worked with.”

Mrs Francini has been succeeded as secretary by Sharon Oldham.