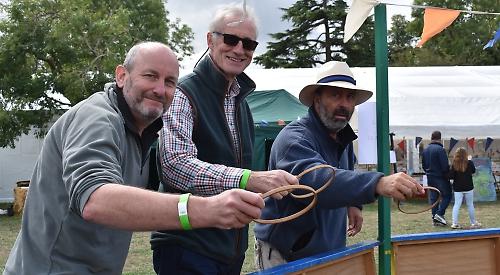 Nigel and Stephen Head, who both live in the village, scooped prizes with their entries in the vegetable, fruit and preserve classes at the annual event on Saturday.

The pair share an allotment where they grow most of their produce.

Nigel, 51, a joiner, took home the RHS Banksian Medal, the Mrs Makower Cup and the Eye and Dunsden Challenge Cup.

He said: “It’s such a good family show and as we live in the next road along it makes sense to enter.

“I’ve always had an interest in gardening from a young age and about five years ago I got an allotment and it has all progressed from there. I mainly focus on the vegetable side of things.”

Stephen, 50, a gardener, won the Mrs Stephenson Cup, the Shakler Memorial Cup for preserves and cookery and the Grace Smith Memorial Bowl.

“Flowers and fruit are the main things I like to grow,” he said. “I’ve done a lot more cooking for this year’s show, making preserves and jams.

“I also did cakes, which is what I won one of the cups for.”

He won five classes for his giant onions and leeks.

Mr Bradley, who was head gardener at Phyllis Court Club before he retired, has been growing vegetables for more than 30 years and now judges shows nationally. He said this had been a challenging year for growers due to the extremely hot and dry conditions.

Mr Bradley said: “I’m particularly proud of my pair of pot leeks, which is a variety normally grown up north.

“I’ve got a bloke who sent a dozen seeds to try so I put them in and they really took off.

“It’s my first year with the pot leeks but I’m a seasoned grower with veg. I’ve been growing and showing since I was 20.

“It’s like taking heroin — not that I would know about that — it’s something you just can’t give up.

“My produce is grown in tunnels until it comes through from seed. That helps bring them on and then you can put them out very early in April. I mollycoddle them.

“When I first entered the show here more than 30 years ago I won nine first prizes but now I just drop in when I can.”

Keith and Sue Hedges, from Gallowstree Common, won three cups between them. He won the Arthur Giles Coronation Cup for dahlias while she took home the George and Wally Cleaver Tankard and the Mrs Henry Ellershaw Cup for floral art.

Mrs Hedges, 71, will be entering the Chiltern Edge Horticultural Society summer show tomorrow (Saturday) and is also part of a team from Sonning Common WI which is hoping to win the Caple Young Challenge at the Henley Show next Saturday.

She said: “I begin to prepare everything two or three days before and start putting all the flowers into buckets of water then put it all together.”

The couple’s son Martin, 47, from Emmer Green, won the Dick Cotterill Cup for vegetables and the Konrad Engbers Cup.

He said he was particularly proud of his two cucumbers with which he defeated Mr Bradley in the class for any pair of vegetables.

Mr Hedges, an accountant, said: “He sets the standard and is incredible at what he does, so anytime you beat him you know you’ve done well. I’ve got Chiltern Edge and Henley Show to go so there is some more stuff coming along ready for those. Some of my dahlias are looking particularly good for Henley Show.

“All the timings have been off this year with the weather and a lot of things did not want to grow when it was really hot.”

Stephen and Harumi Kaseki, who live in Binfield Heath with their daughter Alice, 11, won three prizes between them.

He won the Photography Cup while she won the Ray Williams Memorial Cup for top tray and the George Henbest Cup.

Mr Kaseki, who is head gardener at Coppid Hall, home of the Phillimore family, won prizes for his pictures of Japan and woodlands.

He said: “I’ve always been quite into photography and used to like doing work in dark rooms. We are both going to enter again next year.”

Mrs Kaseki added: “I was so surprised but happy to win.”

The Richardson family took home the Silver Jubilee Award for best family entry. Ian Holmes, from Rugby, entered with his granddaughters Annabelle and Rosie Richardson, who live in the village with their parents Nigel and Rachel.

He said: “I really enjoy
entering the family cup with my grandchildren. It gives me a chance to do some cooking and baking.

“This year I made carrot cake and palmier biscuits, which I have never made before. I like the chance to make some new stuff.

“The show has such a lovely family atmosphere.”

The prizes at this year’s show were presented by Carole Williams, the widow of show stalwart Francis Williams, who died in October.

He helped run the show for decades as well as entering many others locally with his prize dahlias, daffodils and other flowers.

The show attracted about 800 entries in classes for fruit,
vegetables, jams, preserves, cakes and flowers as well as children’s
categories.

The total was down about 20 per cent on last year but
organisers said this was due to the challenging growing conditions caused by the heatwave.

There was a dog show with scores of entries across more than a dozen classes.

The prizes were supplied by Pet Country Supplies in Wood Lane, Sonning Common.

There were more than 20 exhibitors at the show, including Wyfold Riding for the Disabled, the Royal British Legion, the Cystic Fibrosis Trust, Wilfred Owen in Dunsden and the Woodley Concert Band, who performed all afternoon. Woodspinner Martin Tilbury, from Nettlebed, gave demonstrations at his stall.

The Bottle and Glass Inn in Binfield Heath and the Shoulder of Mutton in Playhatch both offered food and drink.

During the prize-giving, show chairman Peter Ransom presented the Chairman’s Cup to Evelyn McQuater, who was in charge of running the event.

He told the audience: “This is my third year as chairman and it has been the most successful year yet. I’m not really claiming it for myself and a lot of the credit has to go to Evelyn.”

More than 2,000 people visited the show and about 300 attended the evening party, where the Alex Mackay Duo performed and the Shoulder of Mutton pub provided a bar.

Mr Ransom said: “It was a very good number of people attending and it’s ever so pleasing when you put in the effort that people come along to enjoy it.

“We put on more activities for children this year. The Punch and Judy shows were well attended, the circus workshop was popular and the people who ran the ferret racing, where people raced against the animals, were particularly good at getting people involved.

“This year’s show has been a bit more expensive as we have been reinvesting in equipment.

“The money raised is used to cover if we have a complete flop year or to reinvest in things like tents and tables.”

Any surplus money is donated to the Royal British Legion and Shiplake Primary School.