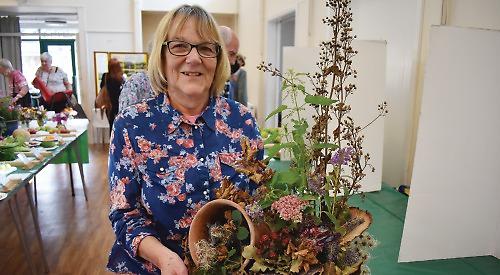 THE chairman of Chiltern Edge Horticultural Society won his first ever trophy at its autumn show on Saturday.

Nigel Crush took home the Baskerville Cup for most points in the photography classes across the society’s two shows this year.

His wife Wilma won six classes in the autum show held on Saturday and his granddaughter Temperance Hunter won a cup too.

More than 100 people attended the show at the village hall in Wood Lane.

The number of entries was down on last year due to the unsually hot summer but Mr Crush said the quality was still high.

He won the “garden visit” photography class at the show as well as coming second in the “sunrise/sunset” class in the autumn show. This was in addition to the points he won for two first places, a second and a third in the spring show.

Mr Crush, of Kennylands Road, Sonning Common, said: “I’ve been trying to win something for years and was very pleased when the results came out. It’s the first time I have ever won something.”

His wife won six classes in the flower, fruit and domestic classes.

It was also a successful day for nine-year-old Temperance, from Caversham, who won the Devon Cup for most points in the children’s classes.

His father Keith, from Gallowstree Common, won three cups for his flowers.

Lynda Crocker, of Crowsley Way, Sonning Common, was recognised for her achievements over the society’s two shows.

Mr Crush said he was pleased with the number of entries.

“It has been very, very dry and I was surprised to see so much put forward for the show,” he said.

“Personally my beans were not very good but others seemed to have done excellently.

“In fact, the quality of the vegetables was very good despite the weather.

“There were not so many roses as with the heat things tend to go over more quickly.

“We had a very good number of entries in the children’s classes and the quality was very high.”

Saturday’s show featured a stall selling plants and garden merchandise and there was a raffle and refreshments.

The society’s next event is a talk by Claire Brown on “Herbs for the garden and the vase all year round” at the war memorial hall on October 9 at 7.30pm.