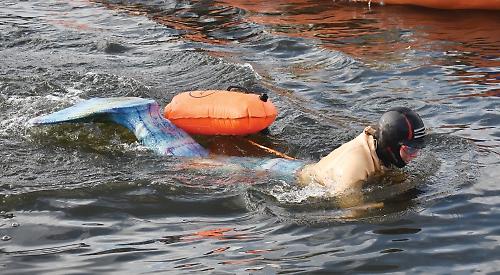 A WOMAN who is swimming the River Thames dressed as a mermaid to raise awareness about single-use plastic said Henley was one of the cleanest stretches she had visited.

Lindsey Cole, 35, set off from Lechlade in Gloucestershire earlier this month and hopes to complete the 200 miles to Teddington Lock in London by next Saturday.

She is completing parts of the swim in a custom-made blue and green mermaid tail which she wears over the top of her wetsuit.

Ms Cole is picking up plastic waste, which will be used to stuff a giant mermaid sculpture made by artist Barbara de Moubray, who is following her in a support boat.

The sculpture will be displayed in the beer garden of the Anglers pub at the finish line.

The women have also donated bottle tops to cosmetics company Lush to make pots for their products as well as 17 balls to Battersea dogs home.

She said: “The original idea came about because I cut myself on a piece of plastic and I was looking for a new adventure.

“Barbara turns waste in to art. It represents how we choke mermaids and creatures with plastic. She made the sculpture in the summer but it has been a bit squashed and weighed down by what we’ve found on the way!”

During the swim the pair have stopped off to meet anti-plastic campaigners, including Henley resident Julia Carey. They also spoke to pupils at Rupert House School in Bell Street.

Earlier in the challenge Ms Cole called the fire brigade to help a cow trapped in the river near Culham.

She swims for several hours each day but it depends on the water temperature, the weather conditions and the river speed.

Ms Cole said: “I’m wearing two wetsuits so I’m buoyant and there’s a good flow. A couple of days ago I did 9km from Caversham to Shiplake in three hours and 20 minutes. Before that there was 10 miles and I had to get out and walk because it was too cold and there was no flow.”

Ms de Moubray said the pair were surprised by how clean the Henley stretch of the river was compared with other parts.

She said: “It’s not too bad here and we did congratulate Julia on how it looks. I understand there is quite a big group of volunteers collecting waste.

“When you are near a habitation there tends to be lots of plastic — Reading was bad.

“We have found a box full of needles, fire extinguishers, fishing lures, a dinghy and two inflatable beds!

“It does get a little bit uncomfortable in the boat with everything in here!

“There are lots of people who are campaigning on this and everyone needs to have an input.”