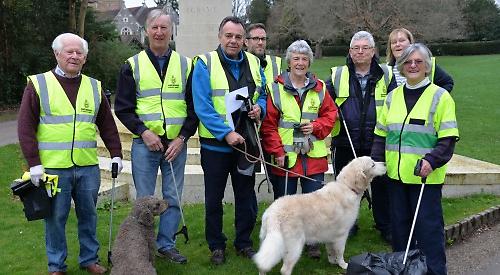 VOLUNTEERS were out in force at the weekend for the Great British Spring Clean.

Dozens of people wearing yellow high-vis vests and armed with litter-pickers scoured the streets and grass verges of villages in search of discarded rubbish.

Between them, they filled more than 200 bags of litter carelessy dropped, dumped or simply chucked out of passing cars.

Their efforts over the weekend were part of the national initiative organised annually by Keep Britain Tidy.

Among the clean-ups was one in Rotherield Greys, near Greys Court, once the home of the late Lady Brunner, who founded Keep Britain Tidy in 1955.

More than 30 people met at the home of organisers Jo and Graham Duncan in Greys Green on Sunday. They were split into groups and cleared verges from Bolts Cross to Badgemore, the war memorial to Dog Lane and also Rocky Lane and the surrounding woods and countryside as well as the verge from the Maltsters Arms to the Hernes Estate.

Mrs Duncan said: “We had such a good time and we have had so many people say ‘thank-you’.

“My 13-year-old nephew Ollie Ellard could not believe how much rubbish he found. It was beyond belief.

“A special mention should go to Graham and Alison Spensley who ended up staying until five o’clock.

“They had so much to collect from the road up to Shepherds Green and found barbed wire and loads of alcohol bottles. We lived in London before we moved here five years ago and we can’t believe that in such a beautiful part of the country people are just throwing litter out of their cars.”

Leo Jennings, from the National Trust, collected rubbish in a truck and trailer throughout the afternoon. Afterwards, the volunteers enjoyed refreshments back at the Duncans’ home.

They collected more than 50 bags of rubbish which included bottles, pills, cigarette ends, metal piping, a vacuum cleaner and a carburetor.

Organiser and parish council Marion Pope said: “It is very sad when I go along the main road and find all this litter scattered everywhere. It is disgusting. What annoys me are the big pizza boxes and so many tin cans.

“We did the clean on Saturday and on Sunday morning when my husband went to get the paper he found an empty can on the floor. You are always going to get people who do not care.”

In Charvil about 70 people helped collect more than 120 bags of rubbish, plus a TV set, a cot and rubber tyres on Sunday.

They cleared the pavements on the A4 and New Bath Road as well as removing dog waste left in bags at the East Park Farm playing fields.

Organiser Miranda Parker said: “People were quite surprised by how much rubbish we found. Some people got loads of stuff and there were millions of bottles. They all came in and had a drink and biscuit afterwards. It was quite sociable.”

Wokingham Borough Council collected the rubbish from both Wargrave and Charvil.