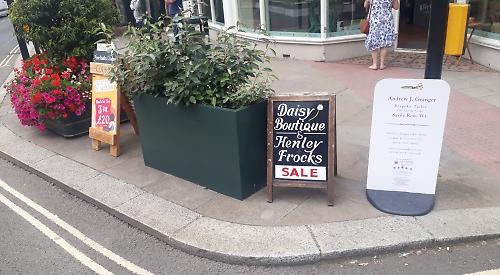 A HENLEY conservation group has welcomed moves to restrict the number of advertising boards in the town.

The town council is restricting businesses to one board each as members were concerned about the obstruction they cause for pedestrians, particularly people with poor vision or in a wheelchair.

It comes after the Henley Society carried out a count and found a total of 76
A-boards in the four main streets.

Geoff Luckett, vice-chairman of the society, said: “Some of the shops had three and I think one had four, which we thought was a bit of overkill.

“The main objection was that there were too many of them. We have pretty narrow streets in Henley and some of the A-boards were causing people to stop in order to avoid them.

“Pavements are meant to be walked on, not for advertising all over them, but we understand the need for shop owners to make a living and for their businesses to advertise their goods and services.

“We are absolutely delighted the council reacted so promptly and brought out a new code of practice. Our concern was obviously for pedestrians in general but in particular for wheelchair users, pushchair users and the old, infirm and partially sighted.”

Mr Luckett encouraged people who thought businesses were breaking the code of conduct to contact the council.

Town and community manager Henley Barnett said most businesses were obeying the code.

She said: “We have spoken to the people who were offending and they have been much better since. A-boards are a fact of retail life all over the country now. It’s just about being considerate.

“On the whole, people in Henley are very agreeable and if you ask them nicely to remove them they are helpful and will do so.”