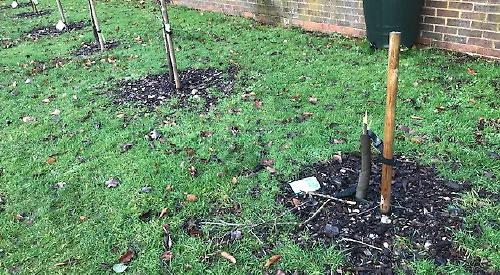 VANDALS have been condemned after they attacked several young fruit trees at a new orchard in Henley.

Two of the saplings were killed and several others had branches snapped off in the attack at Freemans Meadow, off Fair Mile. Others had stake poles removed.

The trees, which cost £100 each, were only planted just over six months ago by residents and Henley Town Council to improve the area, which has been troubled by antisocial behaviour previously.

The vandals struck on the evening of Wednesday, December 18.

The damage was discovered by a member of the Friends of Freemans Meadow, who also found empty condom packets and dog mess, and was reported to the police.

The group believes that a gang of teenagers was responsible. They were seen walking from the town centre to buy alcohol at a convenience store at Northfield End between 2pm and 3pm, ditching half-empty beer bottles en route. The Friends are offering a reward for anyone who provides information that leads to a successful prosecution.

A spokeswoman said: “I am very sad and angry about this — it is just mindless and deliberate.

“Unfortunately, I am not surprised. We have seen cases of vandalism at this site and also at Makins recreation ground and the skate park over the summer. It is a sign of the times.”

In August, shards of glass were left on the play equipment at Freemans Meadow just before it was replaced at a cost of £70,000. The new equipment was only officially unveiled last month.

In June, vandals removed part of a metal fence at Makins recreation ground and sprayed graffiti at the skate park, including blue swastikas on the grass.

Other incidents have included alcohol being confiscated from youngsters and there have been reports of drug-taking, littering, underage drinking and bullying. The spokeswoman said: “At the moment, we are gathering information and intelligence to pass on to the police.

“Our group totally supports the idea of installing CCTV in this area. We know there are conversations ongoing about this and we think it would really help in combination with an increased police presence.

“We have spoken about our concerns at a town council meeting. We are worried that it will put people off, which is a shame given that the new equipment has only recently gone in.”

Kellie Hinton, who chairs the council’s recreation and amenities committee, said: “This incident is very disheartening.

“It is not just about the money, it is about the community effort that has gone into this orchard.

“However, the vandals will not win. We will make that area beautiful again. It is just such a shame that this has happened.”

Anyone with information should call Thames Valley Police on 101 or email friendsoffreemansmeadow
@gmail.com