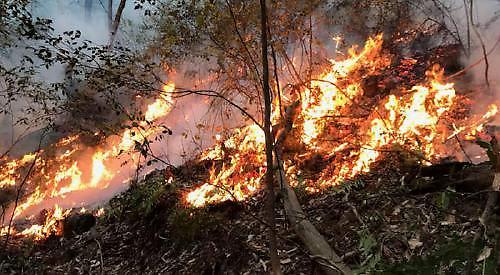 A SOUTH Oxfordshire district councillor from Australia has praised the courage and commitment of people there tackling the bush fires.

Jo Robb fears that the hundreds of volunteer firefighters will be forgotten when the fires are eventually subdued.

She has donated to WIRES, an Australian wildlife rescue organisation, but wants to ensure the families of the volunteers will be looked after, particularly those who have lost a loved one.

She said: “It is absolutely terrible. Many of those who have died are young men and young fathers and it is so tragic.

“The people who are fighting these fires are not making any money and some of them won’t have been paid since October. It is hugely distressing for them, both emotionally and financially.”

Mrs Robb, who lives in Shepherds Green, left Sydney on an ancestry visa in 2001 and married her husband Philip seven years later.

She now represents Woodcote and Rotherfield on the district council and recently stood for the Henley seat in the general election representing the Green Party.

Mrs Robb said that Australians always prepared for the bush fire season but it usually started in January, not three months before.

She said: “We have had the longest period of drought that we have ever known in Australia.

“Firefighters have been warning about a catastrophic bush fire season for a long time and their warnings were ignored.

“The scale is immense and it is hard to know what could have been done to stop it.

“It is a rich country and the water resources in Australia have not been managed properly.”

Mrs Robb grew up in Randwick in the eastern suburbs of Sydney, an area which has avoided the worst of the devastation, although air quality has been affected.

She goes to visit her parents, Pat and Kath O’Connor, every year and she also has a brother, Daniel, who is a property developer in America.

She believes there has been a “deep psychological shift” in Australia but fears the warming of the planet will only worsen now that forests have been destroyed.

She said: “There are no words to describe the grief of losing most of New South Wales’s forests.

“Air quality even in Sydney has been appalling. Children are forced to play indoors and fire alarms are sounding in shopping centres because they are being triggered by smoke. So many people have lost their homes and too many of our volunteer firefighters have lost their lives.

“This is climate change with less than one degree of warming and we are on course for three degrees of warming. It doesn’t bear thinking about.

“The generosity people have shown from around the world, but especially the UK, has been amazing. I hope the Australian government recognises people’s desire for real action on climate change.”