Volunteers clear ditch of rubbish with support of MP 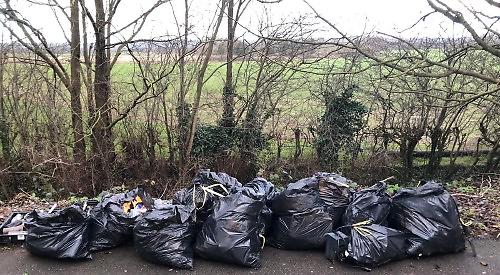 A DITCH was cleared of masses of rubbish thanks to a team of volunteers.

They are members of Charvil Matters, a community group set up last summer to keep the village clean. They meet once a month to clean up litter hot spots.

The group was founded by Sam Akhtar, 29, who lives in Pound Lane with his partner Tasmin Morgan and works in recruitment in London. He said: “I was with a group of friends and we all had this idea to form a group.

“We launched at the Charvil village fete in July and we have been doing a litter-pick every month since then.

“We keep our sessions to an hour each time so that people don’t lose interest.

“We have done three sessions at the ditch that runs along Milestone Avenue. It was an abomination — a real eyesore.”

The volunteers filled the bags with discarded bottles and food wrappers, among other rubbish.

“There were pieces from cars which looked they had come from an accident,” said Mr Akhtar.

“The most outrageous thing that we found were bottles people had urinated in and then thrown away. There were quite a few of those.”

Maidenhead MP Theresa May joined the group at the litter pick in November, which was also in Milestone Avenue.

Mr Akhtar said: “She is really supportive of what we are doing and has given us lots of advice and support.

“We want to continue to grow and get more members but we have come a long way already.”

Mr Akhtar, who is planning to stand for election to Wokingham Borough Council in May, added: “I want to make Charvil an even better place to live.”

For more information about the group, call 07340 178316 or email charvilmatters@gmail.com